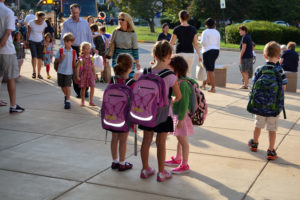 The so-called backpack mail for parents of elementary and middle school students is being phased out in favor of an electronic system, following a successful pilot program, according to APS spokesman Frank Bellavia.

The system, called Peachjar, is specifically designed for schools. It sends electronic flyers to parents’ email inboxes, thus cutting costs and staff time that would otherwise be spent making paper copies and distributing them.

The new system is being rolled out to all elementary and middle schools “over the next few weeks,” Bellavia said.

Families can request that they keep receiving paper copies and paper flyers will be posted on school bulletin boards. Otherwise, there are a number of options for electronic delivery.

“Parents can access the flyers via weekly email notifications they receive, by checking the school’s website, or accessing flyers on the APS Mobile App,” said Bellavia. “Families like the Peachjar option because electronic copies stay online for at least 30 days, and are linked directly to the organization’s website where they can access more information or directly sign up for programs electronically, which is more convenient than keeping track of paper copies and following up on advertised services.”

The pilot program took place at six elementary schools and one middle school last fall and of the families surveyed about it, 86 percent said they wanted to keep the new system instead of returning to backpack mail, according to APS. Nonprofit organizations and PTAs also participate in backpack mail and APS received an enthusiastic response from them.

“More than 100 nonprofit organizations who participate in our backpack mail program were surveyed, and only one respondent indicated a desire to return to backpack mail,” said Bellavia. “APS, schools and PTAs can use the service for free, and nonprofit organizations pay a nominal fee that is less costly than making copies, to distribute their flyers electronically to families. Our PTAs are excited about the service because they can use it for free to distribute their flyers, saving time and the expense of printing paper copies.”

“This program supports the APS commitment to its core value of sustainability, and many families, community members and staff have urged APS to find a paperless (environmentally friendly) alternative to backpack mail,” Bellavia noted.

High schools do not have backpack mail and thus are not slated to get the new system. After the jump, a video about Peachjar.