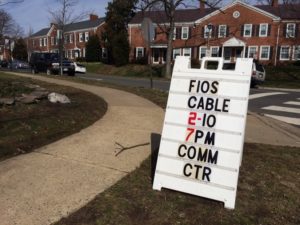 Fairlington will soon get Verizon FiOS TV and internet service.

Fairlington is the last neighborhood in Arlington to be wired for FiOS, according to Rob Billingsley, Arlington County’s Cable Administrator.

Under an agreement with Verizon enacted in June 2006, the company agreed to complete a county-wide implementation of FiOS service within 10 years. The initial service build-out took place mostly in north Arlington, before Verizon’s fiber optic lines were brought to other parts of the county during a second phase of the project.

The final phase, in Fairlington, is expected to wrap up this summer, Billingsley said.

One unanswered question — which is one of the subjects of a scheduled Feb. 10 Fairlington community meeting — is how Verizon will get service from the fiber optic lines that run along the street to the thousands of condo units that make up the World War II-era neighborhood.

It’s a straightforward process for single family homes, for which the home owner also owns the surrounding lot. In historic Fairlington, however, various condominium associations own the land and control changes to the property.

Verizon will need to strike agreements with each condo association to outline how it will get service from the street to each unit. It’s theoretically possible that FiOS could fulfill its contractual obligations to the county by laying the fiber lines without actually providing any residents with service, Billingsley noted.

While FiOS is widely available to homes in the county, many apartment buildings and condo complexes still lack the infrastructure to support FiOS service. 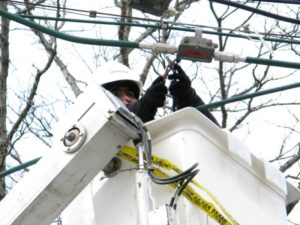 Arlington County, meanwhile, is still negotiating a new cable franchise agreement with Comcast, which is the only cable and internet option in many multifamily complexes that lack FiOS in Arlington.

The franchise agreement allows Comcast to have a monopoly over traditional cable service in Arlington County, in exchange for certain customer service guarantees and funding and bandwidth for public access, education and government (PEG) TV channels.

Comcast’s franchise agreement expired in 2013 and the county has approved several temporary extensions since then.

Comcast and Arlington are “still talking,” Billingsley said, noting that “these sometimes can be complex agreements and there’s a lot at stake.”

The county hopes to reach an agreement by June 30, when the current temporary extension expires. Billingsley declined to specify the points of negotiation, but said such negotiations generally revolve around customer service standards, quality of service and PEG channels.

In terms of the county demands that Comcast is supposedly balking at, Billingsley would only say “it’s not much.” Under FCC rules, the county is not able to regulate Comcast’s rates because of the competition from Verizon in the market.

Billingsley encouraged any resident who has had problems with Comcast or Verizon, that the company has not resolved after being notified of the issue, to call his office at 703-228-3242.