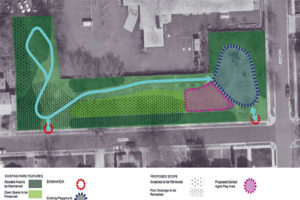 Despite vocal opposition from a few local activists, the Arlington County Board on Tuesday approved the full slate of four proposed Neighborhood Conservation projects.

The County Board allocated $1.4 million for the community improvement projects, which were selected by the citizen-led Neighborhood Conservation Advisory Committee. The committee makes such funding recommendations to the Board twice a year.

Three of the projects were largely uncontroversial — a neighborhood sign for Shirlington, a beautification project for the historic Calloway United Methodist Church cemetery, and street improvements for the 4800 block of 9th Street S. The biggest recommendation, a $800,000 improvement project for Nelly Custis Park (701 24th Street S.), picked up some outspoken critics in the Aurora Highlands neighborhood.

The project would add new plantings, an ADA accessible walkway, improved storm water management and a small play area for school-aged children next to an existing playground. While supporters said most of the community was in favor of the project, a few critics launched a campaign against it, objecting mostly to the playground. Other concerns included the addition of extra pavement from the ADA pathway and “tricycle loop.”

“We heard a number of concerns from the community,” acknowledged Lisa Grandle, of Arlington’s parks and recreation department.

What’s usually an easy vote on the County Board’s “consent agenda” instead became a nearly hour-long discussion that centered around the Neighborhood Conservation process in general and the park project in particular. Board member John Vihstadt led the questioning, and attempted a motion to separate out the Nelly Custis project from the other three, for a vote in March. The motion failed.

The necessity of the conversation seemed to frustrate some Board members. “I‘m disappointed that we’re here tonight, but we’re here,” said Christian Dorsey.

In the end, the Board voted to approve the project as proposed. From a county press release:

The projects, submitted by residents and endorsed by civic associations, are qualified by staff, then evaluated by the Neighborhood Conservation Advisory Committee (NCAC) before coming to the County Board for approval. The NCAC considered 31 projects at its Dec. 10, 2015 meeting and decided to recommend four of them to the County Board for funding.

The Board voted unanimously to approve funding for the four projects. To read the Staff Reporton this Item, visit the County website. Scroll down to Item #10 on the Agenda for the Saturday, Feb. 20, 2016 Regular County Board Agenda.

“We rely on residents to help us identify the best projects to make their neighborhoods safer, stronger and more attractive,” said County Board Chair Libby Garvey. “For more than 50 years, Arlington’s Neighborhood Conservation program has helped build community by funding projects identified by the people who live in the neighborhoods.”

The projects approved by the County Board today are funded by the voter-approved 2014 Neighborhood Conservation Bond. It is the third set of projects to be approved from the $12 million bond. The four approved projects are:

The Board also approved the use of $228,000 in additional funds required for street improvements on South Fern Street (project previously approved by the NCAC at the fall 2011 funding session). This additional funding was reviewed and voted on by NCAC at its Jan. 14, 2016 meeting.

END_OF_DOCUMENT_TOKEN_TO_BE_REPLACED

More Stories
Healthy Paws: Is Your Pet Prepared for a Disaster?9Round Fuels Fitness Success By Feeding an ‘Innate Desire to Move and Battle’