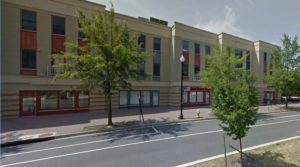 (Updated on 2/29/16) A petition against a planned gun store in Lyon Park has already picked up more than 1,400 supporters.

“This small strip mall along Pershing Drive and Route 50 is in a residential location and literally next door to a day care/after-care school, the Merit School of Arlington,” the petition states. “It is also within blocks of Long Branch Elementary, and less than a mile from Key Elementary and Thomas Jefferson Middle School.”

In an era of ever-increasing gun violence, it is unconscionable to locate a gun shop anywhere in the vicinity of schools, both private and public, with young children in close proximity. The fear of armed intruders in schools is extremely prevalent in our schools, and placing a shop that sells guns and/or ammunition within immediate distance of schools sends a confusing signal to students and could certainly spark fears of access to them and their families.

We call on the owner of the building and the gun shop to exercise concern for the community, and most particularly its youngest and most vulnerable residents, and cease any action that would allow a gun shop to occupy this space.

The petition notes that residents of Cherrydale were successful in thwarting a planned gun store — Nova Firearms — from opening there last year.

“If the shop was not right for Cherrydale, what makes it right for Lyon Park?” the petition asks.

The County Board has sent emails to concerned residents explaining that the county cannot legally prevent the gun store from opening. A county staff comment on the store’s zoning application notes that the county must treat the store “as any other retail shop.”

In just over a day, the controversy over the shop has even entered the world of local partisan politics.

A local business across the street from the store, Smitten Boutique Salon, is encouraging customers to sign the petition against it. In response, the Arlington Falls Church Young Republicans sent an email decrying “evil corporate political speech.”

“How dare a local business use corporate resources to attempt to subvert our political and public policy process,” wrote AFCYR Chairman Emeritus Matthew Hurtt. “Democrats claim to want to protect our fragile democracy, and — if so — they must condemn this egregious act without hesitation.”

NOVA Armory says it is planning to open in March.