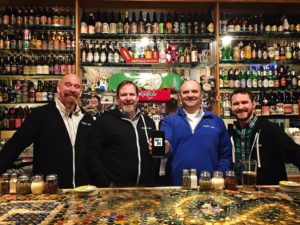 Two years ago, Tim Keough was enjoying a run-of-the-mill night out, meeting up with friends at a new restaurant.

“As the group gathered, we started inviting other people to join us,” Keough recounted. “I thought that this place probably loves that we are bringing more people in the door without any effort.” An idea struck him, and two years later, Wyth+Me was born.

Wyth+Me is a mobile app — its creators are based in Arlington — that is aimed at helping both consumers and local businesses. According to Keough, the app will “change the way people go out as well as fit in seamlessly with the way they currently go out.”

Unlike other location check-in apps, Wyth+Me doesn’t ask users to play a game or earn levels. By checking into a location and activating the app’s promotional capabilities – such as inviting friends or sharing the check-in on social media — users can earn “immediate rewards,” Keough said. The more friends who come out, the bigger the user’s reward. At the end of the night, users can show the app to their server or bartender to receive the discounts they earned during their visit. 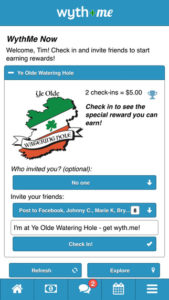 In addition, Wyth+Me takes planning the evening to the next level. The app’s Wyth+Me Later feature allows users to create future events, while getting bars and restaurants to bid for their business.

The app also is helpful for businesses that want to draw bigger crowds.

“Whereas with a coupon or app that provides what amounts to a coupon for visiting, Wyth+Me gets restaurants/bars and customers on the same page in a mutually rewarding manner,” Keough said. “The business gets more people in seats and the customers that bring in the most businesses get the best discounts – a true win-win.”

A beta version of the mobile app launched late last month in the D.C. area and already has seen “significant traction,” Keough said. Even though the app has not done any promotion, Keough added that it already has “dozens of locations online or being implemented now and several new businesses are joining each week.”

Arlington businesses that have signed up to participate include A-Town Bar and Grill, Heavy Seas Alehouse, Sehkraft Brewing, Whitlow’s and World of Beer, he said. Other markets are starting to take notice.

“We’ve already had significant inbound interest from other markets across the U.S. and should be launching in several other large metro areas this spring,” Keough said. “We are excited at the number of locations in other markets already contacting us directly that are ready to use the app and solution, as we believe this is true validation of the concept and model.”