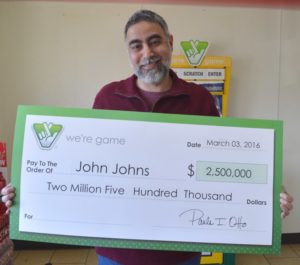 An Arlington man has hit the jackpot — and it’s all because he went to get coffee while his car was in the shop.

John Johns purchased a few scratch-off Virginia Lottery tickets while grabbing a cup of coffee at a 7-Eleven in Alexandria. As he scratched them off, he couldn’t believe his eyes when one of them was a $2.5 million winner for the top prize in the Cash Winfall game.

Johns took the cash option over the annuity and will get a check for $1.35 million before taxes. He’s considering buying a new vacation home with his winnings.

From a Virginia Lottery press release:

No one enjoys waiting for a car to be repaired – unless you happen to win the lottery while waiting!

That’s what happened to John Johns of Arlington. While his car was in the shop, he walked over to the 7-Eleven at 7330 Richmond Highway in Alexandria for a cup of coffee. He also played a few Virginia Lottery Scratcher games while he was there. That’s when he won the top prize in the $2,500,000 Cash Winfall game.

“I had to look two or three times to make sure,” he said. “I just put the ticket in my pocket and left the store.”

On March 3, he returned to the store to receive his check from the Virginia Lottery. He had a choice of taking the full $2.5 million in annual payments over 30 years or a one-time cash option of $1,351,351 before taxes. He chose the cash option.

He’s not the only winner. The store receives a $10,000 bonus from the Virginia Lottery for selling the winning ticket.

$2,500,000 Cash Winfall is one of dozens of games available from the Virginia Lottery. As the name indicates, it features prizes ranging from $20 up to $2.5 million. This is the first top prize claimed, which means two more have yet to be claimed. The chances of winning the top prize are 1 in 1,305,600. The odds of winning any prize in this game are 1 in 2.65.

Mr. Johns said he has no immediate plans for his winnings, although he said there may be a vacation in his future.

The Virginia Lottery generates more than $1.4 million per day for public schools in the Commonwealth.

END_OF_DOCUMENT_TOKEN_TO_BE_REPLACED

More Stories
Progressive Voice: The Importance of Economic MobilityThe Right Note: Thumbs Up and Thumbs Down