As men and women in the military head off to basic training or travel overseas during a deployment, it can be hard for their friends and family to keep in touch. Even after leaving the service, veterans can easily lose track of their unit friends and mentors. 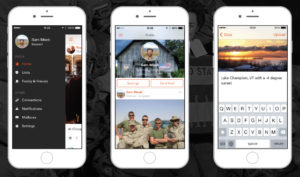 Arlington-based Sandboxx, the developer of a mobile application, aims to fix those communication shortfalls, says co-founder and CEO Sam Meek. In 2007, Meek left the Marine Corps and fell into a finance position on Wall Street.

“During my time there, I was introduced to Maj. Gen. Ray ‘Etool’ Smith — a Marine Corps legend — and Bob Russell, a Marine Corps father and seasoned executive,” Meek said. “They wanted to create a family readiness platform for the Marine Corps. As the only millennial on the team, I shifted the focus to creating a mobile-first, lifestyle platform for the entire military and veteran community… [and] the underlying purpose of Sandboxx has never changed — connect our military community.”

It took the team about a year to build the first version of Sandboxx, which launched on two patriotic dates — it became available on the Apple app store on Veterans Day (Nov. 11) 2014, followed by the Android app store on Independence Day (July 4) 2015. Sandboxx aims to connect active duty service members and veterans both on and off the grid.

“On-the-grid, Sandboxx lets you easily connect to any unit you have ever served, with a unique Instagram-like user experience,” Meek said. So far, 25,000 units have been created in the app by users.

“Its amazing to see our military take to Sandboxx,” Meek continued. “From the Marines at Camp Lejeune to the airmen in Okinawa, Japan, they find Sandboxx gives them a frictionless communications experience with the men and women they serve with.”

The app also enables those in the military to authenticate their spouse, parents or other close family members and friends so they can share a secure, private connection. 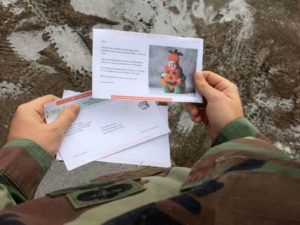 When service members are off the grid, the company offers Sandboxx Letters. There are some points — in basic training, initial summers at the military academies, officer candidate school, certain training scenarios and during deployments — that those in the military have little to no access to phones or the Internet.

“When our military is off-the-grid, the only method of communication is handwritten mail. Sandboxx Letters allows you to send a physical piece of mail directly from the app,” Meek said. “The letter includes your message, a photo, a piece of paper to write on and a pre-stamped and addressed return envelope for swift turn around to the original sender. As I’m sure you can imagine, our biggest customers here are mothers, spouses and girlfriends.”

So far, about 17,000 letters have been sent through Sandboxx.

In keeping with the company’s military roots, Sandboxx’s headquarters is only a short distance from the Pentagon, at the Eastern Foundry incubator in Crystal City.