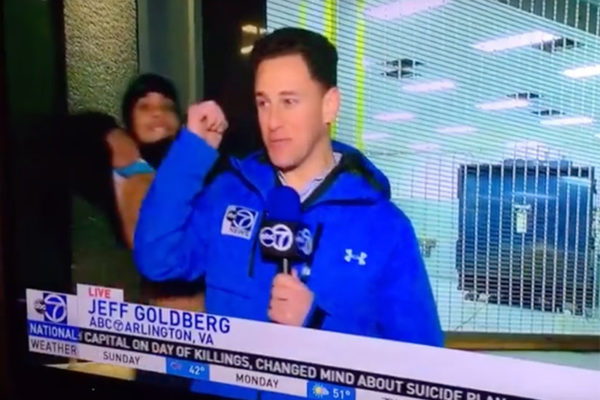 A local TV news report from Clarendon took an ironic and not-safe-for-work turn Saturday night when a woman walked by and flashed the camera, live on the air.

During the station’s 11 p.m. news broadcast, ABC 7 anchor Kimberly Suiters tossed to Virginia bureau chief Jeff Goldberg, who was about to introduce his story on that day’s Shamrock Crawl bar crawl.

“Everyone keeping their clothes on?” asked Suiters, apparently referencing earlier instances in which drunken bar crawl attendees stripped naked and were arrested.

Immediately after Goldberg began answering — “so far, Kimberly” — a woman walked by and flashed her breasts. The split-second moment was captured in this NSFW YouTube clip.

A bit flustered, Goldberg nonetheless continued his report, which highlighted how there were no major incidents and only nine minor arrests for drunken behavior during the bar crawl.

“So, anyway,” Goldberg said as the brief YouTube clip ended.