As cyberattack techniques become less costly and more adaptable, organizations will have to up their cybersecurity game. To that end, Clarendon-based Endgame has built a team of domain experts, scientists, software engineers and designers to protect the country’s most critical assets.

Founded in 2008, Endgame is a software firm that helps governments and commercial organizations to detect, contain and evict “bad guys” from their networks to prevent damage and loss of data.

“By 2008, the accelerating pace of technological change and seismic geopolitical shifts began to intersect in unprecedented ways, from the early signs of tech-enabled social movements to increasingly brazen state-sponsored cyberattacks on private companies, and our increasing dependence on digital systems,” said Margot Koehler, senior manager of marketing and communications at Endgame. 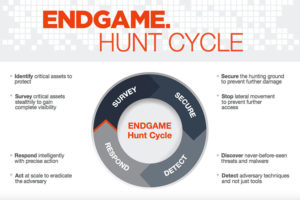 “Companies around the world are spending billions of dollars every year on cybersecurity, [but] 90% of them are breached and the average dwell time for these advanced adversaries is 200 days before they’re even detected,” Koehler added. “Beating these threats requires us to rewrite the playbook and see the world as the adversaries see it.”

Endgame was established to “bring a faster and more agile style of software development to early adopters inside the intelligence community and the Department of Defense,” according to Koehler. “We figured that they are on the front lines of information security, and that their cutting-edge challenges would become commonplace more widely over time.”

Arlington was the obvious location choice to best reach Endgame’s clients. The company is expanding its office and was just named to the “Fast 50” list of high-growth cybersecurity and networking firms for the second year in a row.

“We’re thrilled to be based in Arlington. Arlington is a great place for Endgame headquarters — it offers a unique mix of amenities, talented workforce and convenient transportation options,” Koehler said.

Unlike other strategies, she said Endgame “brings offense to the enterprise by actively hunting for adversaries that bypass the traditional security stack,” helping “customers move from being the hunted to the hunter, stopping breaches at the earliest possible moment, before damage and loss can occur.”

Endgame has about 130 employees, who all focus on its five core values — integrity, boldness, speed, openness and responsibility. Aside from its Clarendon headquarters, the company has offices in Baltimore; Melbourne, Fla.; San Antonio; and San Francisco.

And Endgame continues to evolve to meet its customers’ changing needs and adapt to new research and development. “We’re here to take the security industry into the 21st century and beyond, and empower enterprises to hunt within their networks the adversaries of today and tomorrow,” the company’s website states.