(Updated at 3:10 p.m.) Arlington County Police are investigating a break-in and theft at Japanese Auto Service, a service station located between Clarendon and Virginia Square.

The service center, at 3413 Wilson Blvd, has been in business for 19 years, according to owner Ed Lahrime. It was broken into by an unknown suspect early Sunday morning. 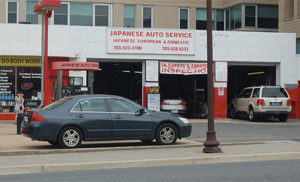 “At approximately 4:51 a.m. on March 27, an unknown male subject forced entry into a business and stole several items of value and an undisclosed amount of cash. The suspect is described as a white male, wearing a dark hooded sweatshirt, blue jeans, and dark shoes.”

A customer provided ARLnow.com with some additional details about what happened.

“The thief took their cash register and a significant amount of money in cash and checks,” the customer told us. “The store owner was able to provide the police with video of the suspect and they are currently reviewing the footage. Poor guy looked heart broken that his business had been violated like that.”

Lahrime said that his motion detection security system didn’t go off during the break-in, for some reason, and has since been replaced by the security company. He also had to replace a broken window and his cash register. All told, the theft is costing him more than $1,500, along with some sleep and peace of mind, he said.

“I couldn’t sleep that night,” he said. “I had to put my phone [with a connection to the surveillance system] next to me to make sure he didn’t come back to rob us again.”

Police told Lahrime of a number of other recent burglaries and burglary attempts in various parts of the county, from Shirlington to Clarendon, he said. This was the first burglary at Japanese Auto Service since it opened nearly two decades ago.

“Arlington is not safe,” said Lahrime.

Tuesday afternoon Arlington County Police released multiple surveillance images of the suspect, describing him as “a white male in his mid-20’s to early 30’s, wearing dark clothing and a gray hoodie.”

“If anyone has information on the identity and/or whereabouts of this individual, please contact Detective Echenique of the Arlington County Police Department’s Burglary/Larceny Unit at 703.228.4241 or at [email protected],” police said in a press release. “To report information anonymously, contact the Arlington County Crime Solvers at 866.411.TIPS (8477).”

“This is an ongoing and active investigation,” said ACPD spokeswoman Ashley Savage.

The video shows the thief returning to the scene of the crime a half hour after the initial break-in, apparently to steal some change from the floor, Lahrime added.