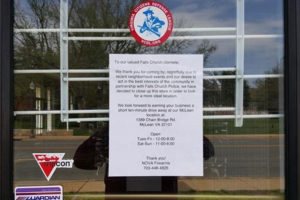 NOVA Firearms, the gun store that was once hoping to open in Cherrydale, has closed its location in Falls Church, in part due to security concerns.

The store, which has an existing location in McLean, had its lease in Cherrydale canceled last summer after a community outcry. In February, it opened an “annex” location in Falls Church, citing “high demand [in] that location for transfers and firearm purchases.”

On Friday, just two months after opening, the store announced that it would be closing.

“Regretfully due to recent neighborhood events and our desire to act in the best interests of the community in partnership with Falls Church Police, we have decided to close up this store in order to look for a more ideal location,” the company said.

A store manager explained that there were security concerns with the Falls Church location that came to light after its opening.

“Conversations in partnership with the Falls Church police department and the ATF revealed a rash of burglaries and firearms thefts in the area, and the security of the building at 909 West Broad Street, came into question,” wrote Erik Lorentzen. “In the interest of doing what was best for the community and preventing an unsavory situation with stolen firearms on the streets, we chose to close the store and move the inventory back to the more secure McLean location.”

(The McLean location was burglarized in December.)

Lorentzen said there were also “some business related reasons” for the closure.

“The Falls Church annex… was always a bit of an experiment to see if it was financially viable,” he said. “Over the two months the store was there, no such market revealed itself to us, and the store barely covered its operating expenses.”

“Falls Church was actually very welcoming and we had what we felt was a very good relationship with our neighbors,” said Lorentzen. “We were never protested and never received any pressure from anyone pushing us to close down. We simply looked at the situations… and made the call ourselves that this was the right and moral thing to do. We greatly appreciate all the support we have received from our customer base, and look forward to seeing everyone at the McLean store, which isn’t going anywhere.”

NOVA Firearms is not to be confused with NOVA Armory, the gun store that is now open in Arlington’s Lyon Park neighborhood despite vocal opposition from some in the community.