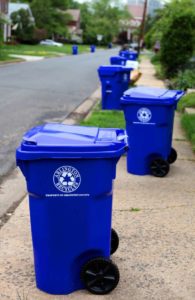 So you heard last fall that Arlington’s recycling contractor was no longer recycling plastic bags. No big deal, you can just take all of those grocery and shopping bags to your nearest supermarket for recycling.

But it’s still okay to put a garbage bag full of recyclables into the blue bin, right?

Even garbage bags are verboten under the new policy.

Also, make sure that plastic films — including bubble wrap, saran wrap and those little air pockets that come in Amazon.com boxes — stay out of the recycling.

There’s a rumor going around that the presence of any plastic bag in a recycling bin automatically forces the recycling crew to dump it as trash. A “stinky policy,” is how one tipster described it. But that’s not exactly true, Grabowsky says.

The policy applies to residents who are served by the county’s trash and recycling service. Those living in apartment buildings or condos have their recycling picked up by a private contractor, which may have different rules.