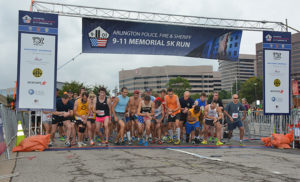 It’s five months away, but registration is open for the annual Arlington Police, Fire and Sheriff 9/11 Memorial 5K.

Marking the 15th anniversary of the Sept. 11 terror attacks, this year the race is raising funds for the Tragedy Assistance Program for Survivors and the National Fallen Firefighters Foundation.

The race will take place on Saturday, Sept. 10 in the Pentagon City area. It is limited to 5,000 runners.

“Since its inception, the Arlington Police, Fire & Sheriff 9/11 Memorial Race has had over 30,000 runners cross its finish line and has raised over $500,000 for 9/11-related charities,” notes the race website.

Race organizers are also helping to promote a race this weekend in Alexandria.

The Run for 32 is being held at Cameron Run Regional Park (4001 Eisenhower Avenue) on Saturday, April 16. Held in remembrance of the victims of the 2007 Virginia Tech school shooting, the race helps to raise money for the Koshka Foundation, which was founded by one of the shooting’s most critically injured survivors.