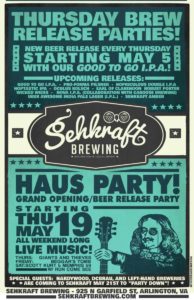 Starting on Thursday, May 5 — Cinco de Mayo — the brewery and beer hall will release varieties of its in-house brews. First up is Sehkraft’s “Good to Go IPA,” starting at 5 p.m. on May 5, followed on May 12 by the release of its “Hoptastic IPA” at 8 p.m. Both release events include a free concert from 8:30-11 p.m.

From May 19-21 Sehkraft will be holding a “haus party,” with five of its in-house beers on tap: Good to Go, Hoptastic, Sehkraft Amber, Wicked Weiss (a Berliner-style wheat beer) and Uber Awesome IPL (India Pale Lager).

“It’s American Craft Beer Week that week so what better way to ‘Say Craft’ by throwing our Haus Party/Grand Opening of Sehkraft,” owner Devin Hicks told ARLnow.com in an email. “We’ll have our friends Hardywood, DC Brau, and Left Hand Breweries over to help celebrate on the 21st. They’ll be bringing a couple of their brews over and we’ll be doing BBQ specials all day on Saturday. DC Brau is bringing over their Wings of Armageddon and 5th Anniversary brews and Hardywood is bringing over some Richmond exclusive brews.”

“Going to be quite an event,” Hicks added. There will also be free live music each night and a kids show Saturday morning, he said.

After the “haus party” week, Sehkraft will be rolling out a number of other brews, including “Pro Forma Pils,” “Hopriculous Double IPA,” “Earl of Clarendon Robust Porter,” and “Nova IPA,” a collaboration with Vienna-based Caboose Brewing.

Hicks, who has clashed with Arlington County’s zoning staff in the past, took the opportunity to say that Sehkraft would have opened earlier — it opened in November — had it not been delayed by various local regulatory holdups.

The opening was delayed for four months because, according to Hicks, zoning inspectors insisted that the “brewery tanks blocked the view in the windows to the activities inside the venue.” He called it “a huge waste of time and money.”

“Obviously, a major hardship to us eventually opening, paying taxes, providing quality jobs and contributing to making Clarendon and Arlington County a better place to live, work and visit,” Hicks said. “Obviously we had other delays via the zoning’s ‘effective methodologies’ but this definitely set the tone to our construction nightmares right off the bat.”

“I am hopeful that with my words about the difficulties with navigating through zoning’s bureaucracy, it will help other businesses have a less stressful, less time consuming and less costly ordeal in opening in a great County to do business in,” Hicks continued. “That office needs to recognize that we are all on the same team.”

Previously, Hicks said that county inspectors forced him to install a bulky wheelchair lift in the middle of the restaurant in order to provide those with disabilities access to the venue’s small entertainment stage.