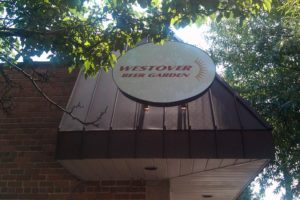 It’s been a contentious couple of weeks for the Westover Market and Beer Garden. Upon receiving a warning from Arlington County, it suddenly declared the beer garden would shut down until April 1. Today, the saga continues as management has decided to re-open the beer garden against the County’s wishes.

Owner Devin Hicks said he’s tried working with the county on the matter but his efforts have not been successful. Now he’s going to do what he believes Westover Market is entitled to do by law — operate a year-round patio area.

Bob Brosnan, Director of the Department of Community Planning, Housing and Development, clarifies that Hicks did not receive an actual citation — as stated in a previous article — but rather a courtesy letter requesting compliance. A violation notice will likely be sent out on Monday and Westover Market will have 10 days to bring itself in compliance, or face fines, Brosnan said.

The goal is not to hinder businesses or to collect fines, it’s to keep businesses in compliance with county ordinances, according to Brosnan.

“We’ve been trying to work with them to make them understand how we can work with them legally, that is our goal,” he said. “Our goal in these cases is always compliance.”

Arlington County has developed a web page specifically relating to the beer garden at Westover Market. On the page, it states that establishments with outdoor patios must have ample parking for the number of people being served, but that parking requirement is reduced if the establishment is near a Metro stop. The County allows establishments to get around the parking rule by becoming “seasonal” and closing for three or more months each year.

Because the Westover beer garden isn’t deemed as having enough parking, it’s supposed to be seasonal. However, Hicks points out the rule is technically a “guideline” and not an actual “ordinance.” He believes the county has been enforcing a measure that was never officially put in the books.

The County’s web page for Westover Market links to another County page, titled “Guidelines for Outdoor Cafes.” On that document it states: “Unless otherwise required by the County Board, outdoor cafes shall be exempt from any parking requirement.” It goes on to say: “There is no explicit requirement in the Zoning Ordinance that requires them to be temporary or seasonal.”

Of his long-running trouble with the county, Hicks said relations have improved over the past year or so, but he believes he’s currently being unfairly targeted with the enforcement of the seasonal rule.

“We’re just going to go ahead and do what’s legally right,” Hicks said. “There’s nothing in the rules that says it has to be seasonal.”

Earlier this winter, Hicks had the tables, chairs and bar removed from the beer garden area in an attempt to comply with the county’s zoning enforcers. Still, patrons who bought beverages inside were allowed to take the drinks outside and congregate around the fire pits. Hicks says he was later told that no patrons were allowed in the beer garden regardless of circumstances, and that he would even have to turn the patio lights off at night. That’s when he decided enough was enough. As of today, all seating, televisions and fire pits are back, and an outdoor bar will be operational.

“No one’s winning from this,” said Hicks. “We’re both losing.”

Hicks is careful to note his issue is not with the members of the County Board. It’s strictly a problem with the county’s zoning enforcement.

Hicks pointed out that spring officially starts on March 20, as does the kickoff for DC’s National Cherry Blossom Festival. Despite the warmer weather and springtime activities, he is upset the beer garden is supposed to remain closed until April.

“We have decorative apple trees, they’re beautiful in the spring,” Hicks said. “But for some reason this April 1 magic number is when we can start the beer garden.”

Brosnan said the County does not have a rule about April 1, the rule is simply to keep a business “seasonal.” Therefore, Westover Market’s beer garden, like other seasonal businesses, should be able to open the first day of spring as long as it had been non-operational for the required three months.

Brosnan pointed out that for Hicks to receive the music permit, he had to review and agree to the County’s rules as laid out in a document called “Zoning Administrator Advice” from November 2010. Hicks had previously agreed to comply, and Brosnan says he isn’t sure what has changed to cause the current state of affairs.

Hicks is now anticipating a fine of some sort for his defiance of the county rules. When asked if he would pay such a fine, he said he’d address that if the time comes. Meanwhile, he and the other employees are focused on business as usual.

“We’re trying to run a business and trying to give people what they want while following rules of county, which we’ve done,” Hicks said.

Brosnan believes the overall fight may be an issue of wording in documents. That, he says, is for lawyers to hash out. Brosnan noted that once Hicks receives a citation for non-compliance, he has the option to appeal.