For most of the summer, the Westover Market’s beer garden served as a neighborhood meeting place where friends and neighbors could gather to drink a few beers, eat some food, and listen to a local musician play a few tunes. But now the music has stopped, and the big outdoor patio is limited (in terms of legal occupancy) to a measly nine customers.

The changes were mandated by the county’s zoning enforcement office, which acted upon noise complaints from two neighbors.

In terms of the music, Westover Market had neglected to apply for a live music permit before it started hosting performances. Such a permit requires county board approval. Market manager Devin Hicks says they have since applied for the permit, forking over most of the $1,200+ application fee in the process. The earliest the board could act on the application is November, at which point outdoor concerts are out of the question for all but the hardiest music fans. 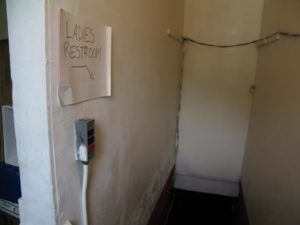 In terms of the beer garden’s occupancy, it all comes down to the bathrooms. The market was built more than 50 years ago, and wasn’t configured with sit-down food service in mind. To get to the bathrooms, one must walk inside the store and through the back storage area. Rather unchivalrously, the ladies room is at the bottom of a dark, steep staircase. The gents room is further back on the ground floor, in the storage area. County regulations generally don’t allow such a setup, but the market had been granted waivers for an outdoor cafe for nine people. The 24-36 beer garden customers the market wants to host doesn’t fly with code enforcers, especially in light of the decidedly handicap-unfriendly ladies room.

Hicks says he’s been working with neighbors to find the right decibel level for the music. He says one older man who lives three blocks away has been the lone voice of protest against the concerts, which run from 6:00 to 10:00 p.m. In at least one instance, Hicks says, officers showed up at the beer garden after the man called police.

Hicks said he would like to have bathrooms that were compliant with regulations, but is hoping to be granted another waiver based on the age of the building. He has collected hundreds and petition signatures and hired Arlington zoning attorney Barnes Lawson (of recent dog mural fame) in his effort to get the county to relent.

“The community needs someone who’s going to fairly and accurately enforce the law,” Artman said. “It’s very nice to have the emails, but it won’t change anything… in terms of my action.”

Local blogger Miles Grant is making a cause célèbre of the beer garden issue, thanks to posts with titles like “Public Enemy #1 in Arlington: Fun” and “Step Up To Save Westover Market Beer Garden.”

Grant, a staunch Democrat and a self-described “bleeding heart liberal douche,” asks: “What does it say about Arlington County’s zoning & permitting process that a few complaints can completely silence the music that hundreds of people had been enjoying every week?”

For the time being, the market is allowed to keep the beer garden open, with up to nine customers (although we counted one or two more than that during last night’s Redskins game). Hicks hopes to have the occupancy issue resolved soon. Meanwhile, his lawyer has pointed out a new potential problem: a mural on the wall outside the market depicts people dancing. Could that count as an advertisement, like the dog mural in Shirlington? 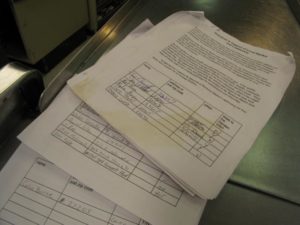 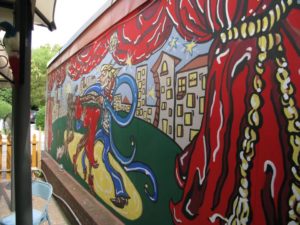