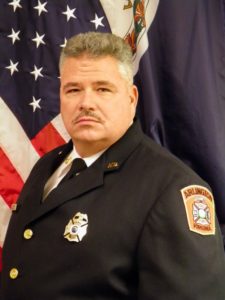 Arlington County has a new fire chief, but he’s a familiar figure in the fire department.

“Chief Bonzano brings a wealth of experience to this position, as well as deep ties to the Arlington community and Fire Department,” Schwartz said in a statement (below). “Over the last three decades, he has been committed to being a strong and progressive leader and I am thrilled that he will continue to do so as our new Fire Chief.”

Bonzano’s career with ACFD has included serving as the Fire/EMS branch director following the Sept. 11, 2001 terrorist attack on the Pentagon.

Arlington has not had a permanent fire chief since last September, when Chief James Schwartz was appointed deputy county manager.

County Manager Mark Schwartz has named James Bonzano Arlington County Fire Chief, after an extensive national search. Chief Bonzano joined the ACFD in 1984, and has worked in a multitude of positions in his 31 years with the department, most recently serving as Acting Assistant Chief. Over the course of his career he has led and served in nearly every section of the fire department, including time as South Deputy Chief, Personnel Services Section Chief and Emergency Medical Services (EMS) Battalion Chief. Chief Bonzano will begin his new position on May 8.

“Chief Bonzano brings a wealth of experience to this position, as well as deep ties to the Arlington community and Fire Department,” said Schwartz. “Over the last three decades, he has been committed to being a strong and progressive leader and I am thrilled that he will continue to do so as our new Fire Chief.”

Chief Bonzano has worked to create positive and lasting partnerships with both the community and regional fire prevention and EMS programs. He serves on committees for both the Metropolitan Washington Council of Governments and the Northern Virginia Chiefs Committee, and is a well-known and respected member of the public safety community.

“I am honored to work alongside the great men and women of the ACFD,” said Bonzano. “I was born here in Arlington, and I feel privileged to continue to serve this community as Fire Chief. I am looking forward to the great things I know we will accomplish together.”

Chief Bonzano received his Master’s degree from Marymount University in Organizational Leadership and Innovation, and his Bachelor’s degree in Health Science from Old Dominion University. He currently serves on the Board of Trustees at Dominion Hospital and as a Board Member for the Northern Virginia Community College EMS Program.

After the jump, Schwartz’s memo to county employees.

I am happy to announce that after an extensive search, I am appointing James Bonzano as the new Arlington County Fire Chief. Chief Bonzano has been with ACFD for 31 years, and will bring a wealth of knowledge and experience to the position of Fire Chief. Over the years he has served in many capacities within the ACFD, and I know that this breadth of experience will serve him well in this new leadership position.

Many of you have worked with Chief Bonzano over the years and know that he is a highly qualified and respected member of both the ACFD and the public safety community. I am looking forward to continuing the great work that the ACFD does each and every day for our community, as well as exploring new ideas together.

I would also like to thank Joe Reshetar for his service as Acting Fire Chief over the last eight months. I am grateful for his leadership during this time of transition. Chief Bonzano will begin his new position on May 8, and I hope you will join me in welcoming and supporting him.