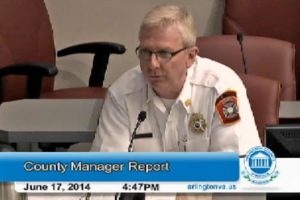 Schwartz was appointed by another Schwartz — Acting County Manager Mark Schwartz. The appointment is effective Sept. 8.

The full Arlington County press release, after the jump.

Acting Arlington County Manager Mark Schwartz made the appointment, which is effective September 8, 2015. “No one is more qualified than Jim Schwartz to help lead our region’s preparedness efforts,” said Mark Schwartz. “His leadership on Sept. 11, and every day since, has helped to improve the safety of our entire region. I am very pleased that he is joining the County Manager’s Office in this critical role.”

Chief Schwartz’ portfolio also will include the County’s technology services. “Every day, we see powerful opportunities that technology can bring to our public safety agencies,” Chief said. “I look forward to advancing these efforts to help keep our community as safe as possible.”

Mark Schwartz also announced that he is naming ACFD Assistant Chief Joseph Reshetar as ACFD Acting Fire Chief, effective September 8, 2015. Chief Reshetar joined ACFD in 1985; over his career, he has held a number of assignments, in both operations and administrative positions. For the last three years, he has served as Assistant Chief for Operations, responsible for the 300 staff operating in 10 fire stations across Arlington County and the City of Falls Church.

Chief Reshetar is a graduate of the National Preparedness Institute at Harvard School of Public Health; he is currently completing his degree in Fire Administration and Homeland Security. He is a member of Leadership Arlington.

Arlington County will conduct a national recruitment for the new Fire Chief; the recruiting process will begin this fall.

A lifetime of leadership

Chief Schwartz was appointed Chief of the Arlington County Fire Department (ACFD) in June 2004; he has been part of ACFD since 1984. Prior to his appointment, he served in a variety of Fire Department positions, including Assistant Chief for Operations, responsible for all response-related activities, including fire, EMS, hazardous materials and technical rescue response, incident management and operational training. In April 2003, he was assigned to the Office of the County Manager where he served as the Director of Emergency Management until his appointment to Fire Chief.

The Arlington County Fire Department was the lead agency for the response to the September 11, 2001 attack on the Pentagon. Chief Schwartz led the Unified Command effort for the Pentagon incident.

Chief Schwartz is a member of International Association of Fire Chiefs’ Committee on Terrorism and Homeland Security and is a member of the Interagency Board on Equipment Standardization, He has also served on the Advisory Council for the Joint Counterterrorism.