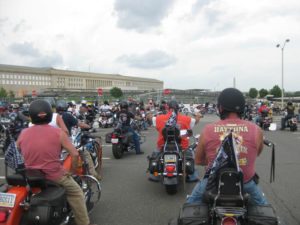 The return of thousands of motorcyclists to the area for the annual Rolling Thunder ride is just three weeks away.

The 29th annual Rolling Thunder will rumble into town on Friday, May 27. As in previous years, residents who live along I-395, Route 1 and other local highways can expect to hear what one might term the “sound of freedom” throughout much of the weekend.

Rolling Thunder will again have its base of operations at the Hyatt Regency hotel in Crystal City. If you’re heading to Chili’s for dinner, you’ll potentially be competing for street parking and tables with hundreds of bikers.

The main Rolling Thunder event will happen on Sunday morning, when the bikers will gather in the Pentagon parking lot from 7 a.m. to noon, before departing en masse across the Memorial Bridge to the area around the Lincoln Memorial and the Vietnam Veterans Memorial in D.C.

Rolling Thunder “pays homage to the nation’s veterans, particularly those still Prisoner of War/Missing in Action from all wars.” While the organization primarily exists to support veteran’s and POW/MIA causes, regardless of politics, it has recently posted some overtly political messages to its website.

“We pray for a new administration in 2016 that will follow the Constitution of the United States and worry about America, our people and our troops first,” said the organization’s National Executive Director and National President, in a letter to members. “Why can’t we let these foreign countries fight their own wars? This administration keeps getting us deeper and deeper in the war against Islam.”