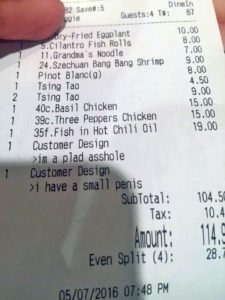 A group of friends who dined at Peter Chang restaurant (2503-E N. Harrison Street) on Saturday were shocked to find the words “asshole” and “I have a small penis” on their receipt at the end of the night.

The words were apparently insults typed in by one of the servers, in response to a particularly persnickety member of the group.

One of the diners, Matthew, emailed us and the Washington Post about the experience but asked that his last name be withheld. Matthew said the trouble started when one member of his party, who previously lived in China and speaks Mandarin, but is not Chinese, commented about the way the rice was served.

“One of my friends — who lived in China for 5 years — questioned the authenticity of how the rice was supposed to be served at a Chinese restaurant,” Matthew said. “Peter Changs [sic] served it in one bowl instead of individually, which is how I guess they serve it in China. I guess the waitress took offense to that.”

Then the receipt arrived. Below the various food items, it included the following lines: “im plad [sic] asshole” and “i have a small penis.”

The man who questioned the rice serving was wearing plaid that night, Matthew said. Management, according to Matthew, tried to pass it off as a “joke.”

“I wasn’t too offended by it, but the waitress and the management kept saying it was simply a ‘joke’ and they didn’t do too much to apologize,” he said. “Ultimately we got a $20 gift card. Like many incidents, the cover up was worse than the crime.”

It’s unclear whether the server purposely included the lines on the receipt or if they were only intended to vent some steam internally.

The restaurant has not responded to a request for comment from ARLnow.com. A manager told the Washington Post that “servers had previously been warned before about leaving offensive comments in the [point-of-sale] system” and that he’s cut the hours of the server who left the insults on the receipt.

The Post also reported that when the group asked to split the check four ways, the server replied sarcastically, “That’s totally how they do it in China.”

Chef Peter Chang, whose Szechuan cuisine has earned him something of a cult following, opened his eponymous restaurant in Arlington’s Lee-Harrison shopping center last March.