I’m very excited to be able to explore this eclectic collection of beers with you. The previous Beer Camp mixed pack was a bit underwhelming and has since been duplicated with better results by craft breweries across the country. In fact, our own Devil’s Backbone Brewing Company, who collaborates on the Northeast & Mid-Atlantic team here, releases their own strong collaboration mixed packs. But the intervening Beer Camp branded releases from Sierra Nevada, like the delicious hoppy lager and the tropical IPA, showed that there could be something exciting from another mixed pack.

This promise of innovative and well-made craft beer is fulfilled in this year’s Beer Camp Across America where the beers really are the stars. 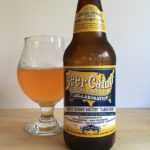 Austin Beer Works, Bayou Teche Brewing, Creature Comforts Brewing Co., Funky Buddha Brewery and Wicked Weed Brewing collaborated to create this tart, refreshing summer beer. I enjoyed mine while watching the Kentucky Derby, which though not hot, evokes the lushness of the South. This table beer, which is a nod to the extremely low alcohol Belgian beers of the same name, is made with corn grits in the grain bill, tea leaves and peaches, papaya, guava and prickly pear. The aroma was both fruity (muscat grapes and stone fruits) and alkaline (baking soda), which is an indicator that there’s going to be some sourness. Sure enough, the first things you get from the flavor are a tartness and big fruit. At colder temperatures the fruit seems to be tropical, but the peaches peek through as it warms. At 4.9% ABV, this is a beer that can be enjoy in the sunshine while you grill. 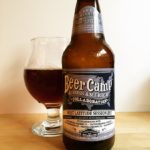 Bear Republic Brewing Co., Faction Brewing Company, Mad River Brewing Co., Magnolia Brewing Co. and Maui Brewing Co. collaborated to create this tart, bitter and spicy beer. Another refreshing offering from this collection, the session rye blends the spiciness of rye with the tartness of hibiscus. The result is a very drinkable and sessionable beer. The aroma suggests a hoppy brown ale with it’s clean floral notes and hint of brown bread. But everything changes when you sip it: the black pepper mingles with the slight pucker of the hibiscus creating a unique experience. 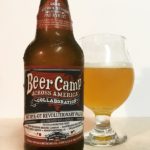 Devils Backbone Brewing Company, Dogfish Head Craft Brewing, Lawson’s Finest Liquids, Stoudts Brewing Company and Trillium Brewing Company collaborated to create this unique cider blended brew. Made with apple cider from Vermont and Delaware and rye, this pale ale makes for yet another unique offering from the Beer Camp set. The aroma balances green herbs and soda cracker with a hint of black pepper. Surprisingly, the flavor takes a sharp turn with a dry biscuit-like malt that is sharpened by peppery spice and floral bitterness. As it warms, the light fruit of the apple is actually quite apparent. I haven’t had a beer like this one before. It tasted both new and, somehow, old. It’s worth letting this one warm a bit – the cider pay-off is tasty. 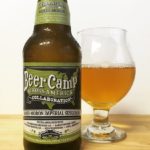 Bale Breaker Brewing Company, Barely Brown’s Beer, Black Raven Brewing Co., Melvin Brewing and Odell Brewing Co. collaborated to make this huge beer. Using Yakima Valley hops as the centerpiece of this beer in every step of the brewing process creates a beer that smells and tastes like an Imperial IPA, but manages to stay around the high end for a regular IPA. This is what makes it an imperial session beer — an oxymoron, huh? I get it, though, I prefer to think of it as a session imperial beer as it’s more manageable than a 10% ABV imperial IPA. Anyway, expect big melon, stone fruit and tropical fruit when you smell and taste this brew. Watch out though, it’s too easy to down this one quickly. 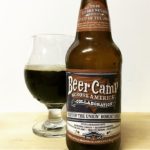 Bagby Beer Company, Beachwood Brewing, The Lost Abbey Brewing Company, Smog City Brewing Co. and Societe Brewing Company collaborated on this flavorful stout ale. Seemingly a traditional American craft stout, this one kind of took me by surprise. My bottle, at least, came across as a hoppy imperial black IPA rather than a chocolatey rich stout. I’m not complaining, in fact it made me like it even more. Sweet coffee in the aroma gives way to a woody, black tea flavor that balances nicely with the char of the black malt. This big brew is quite drinkable and lacks the heaviness of other stouts with similar alcohol contents. In a time of strong, aged or flavored stouts, this one ends up being a welcome change. 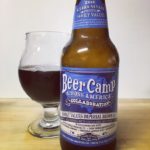 Schell’s Brewing Co., Dark Horse Brewing Co., Half Acre Beer Company, Perennial Artisan Ales and Sun King Brewery collaborated to make this cocoa-infused strong brown ale. This was the only beer in the pack that gave me pause. To say this is strong is not an overstatement. An expected aroma of brown bread and molasses gives way to a flavor that is dominated by brown sugar and alcohol. This beer’s simplicity surprised me, coming at the end of five other diverse and complex beers. That said, it was still pretty good. I’ve been a big fan of the reemergence of the brown ale, whether it’s full of hops or pumped up with alcohol. While this brew might not blow your mind or change your idea of craft beer, it is a solid brown ale.

Dominion Wine and Beer just got this in! Let me know if you’ve tried any of these and what you think. Cheers!