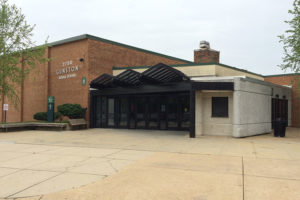 Arlington Public Schools and the Animal Welfare League of Arlington are trying to figure out how to get a cat and her kittens off of the roof of Gunston Middle School (2700 S. Lang Street).

The feline family recently took up residence on the school’s roof, apparently after the cat climbed a tree to get there.

Both APS and AWLA want to get the cat and kittens down from the roof, but are still formulating a plan for how to do it.

“We think that the mother cat is feral, and we want to capture the kittens while they are young enough to be socialized,” said AWLA’s Susan Sherman. “Once the kittens are old enough to get down from the roof on their own, they will likely be too old to socialize.”

“We offered to assist the school facilities people to set a humane trap on the roof, but they said the mother cat might attack them,” Sherman explained. “Our officers do not climb up on roofs. The part of the roof the cats are on is flat, and we requested access from classroom windows but the school facilities person told us the windows cannot be unscrewed or removed.”

“We are working on a plan to capture the kittens as soon as possible but want to do it in a way that is safe for the cats and people,” she said.