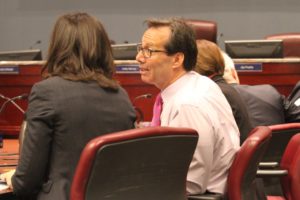 The six-person panel was intended to advise the County Board on strategic priorities. The rushed vote to establish the panel on April 19, and questions about what exactly it is intended to accomplish, led to criticism from some community groups.

Its principal backer, County Board Chair Libby Garvey, has also faced criticism of the panel on the campaign trail from Democratic primary challenger Erik Gutshall, who has raised it as an issue of government transparency. Garvey defended the idea and clarified the intent of the panel at Tuesday afternoon’s Board meeting.

Jay Fisette, who was critical of the plan last month but voted to support it nonetheless, created the motion to defer its implementation. His motion was supported unanimously.

Fisette issued the following statement about his motion to defer.

Since we voted on the charge for this Blue Ribbon Panel in April, I have been inundated with questions and concerns. Many in our community are either angry at how this happened or confused about what actually happened. I was challenged to explain how I could vote for something after having publicly expressed significant concern about it. I had no good response.

This Board has received letters of concern from groups such as the Alliance for Housing Solutions (an umbrella group representing over 35 Arlington non-profits, churches and other organizations), the Planning and Urban Forestry Commissions and Virginians Organized for Interfaith Community Engagement.

The letters raised concerns with the process. One stated, “There was virtually no notice that the Board would adopt the Charge and the language was not available for public review and comment. This flies in the face of repeated messages by many Board members of the need for greater transparency and adequate public advance notice of Board actions.”

And another remarked, “When the Board takes action in this manner, abrogating its own stated commitment to transparency and accountability, it seriously undermines the importance of citizen engagement that should be the goal of everyone in the County.”

Others spoke to the panel’s charge itself. One commission was concerned that “the Panel’s charge is largely duplicative of the responsibilities of the Planning Commission as outlined in the Code of Virginia” and that “it was unclear from the Panel’s charge how members of the public would participate in its meetings or contribute to its work.”

And one letter summarized the concerns of many, “In short, the panel is duplicative; the charge is murky and invests far too much power in 6 people to potentially dramatically alter priorities resulting from the involvement of many Arlington residents already; and the Board’s action in creating it seriously undermines the good governance goal of encouraging and valuing citizen engagement. Thus, we urge you to rethink the panel.”

Clearly, the community has said that our April vote to approve this Panel without public notice was flawed, and today’s vote is a step toward rectifying that action. I very much appreciate my colleagues’ support for taking a step back and asking for feedback from some key stakeholders as well as from the larger community.

My support for this step should not be taken as support for the Panel. I remain skeptical, yet I am glad that the process will be opened, and I am willing to see if the purpose can be clarified and made useful.

Finally, we must thoughtfully consider the recommendations of the Community Facilities Study Committee (CFS Committee) and their relationship to the charge of this Panel. Many of the members of the CFS Committee have been unhappy with the lack of action on their recommendations, which was further inflamed by the creation of the Blue Ribbon Panel.

Honestly, if anything deserved the Blue Ribbon monikor, it was the CFS Committee. It was a model process with compelling and serious recommendations to guide our future.  It was a true collaboration between the schools and the county, with a clear charge and broad representation, and it concluded within the established 10-month timeline.

To remind us, the CFS Committee was tasked to identify the principal strategic challenges that Arlington faces, point out the barriers to overcoming those challenges and recommend ways to address them.

And the key recommendation they made for responding to these challenges was to establish, “A new system for more open, systematic and coordinated County and School Board decisions about setting priorities for future facility budget and location decisions.” And they told us exactly how to do this.

It is this recommendation, that provides guidance on how to set priorities for much of our community’s future capital needs, that deserves our immediate attention and should be top of mind as we reconsider this Panel. I am especially interested in the feedback that we have requested of the CFS Committee in this regard.