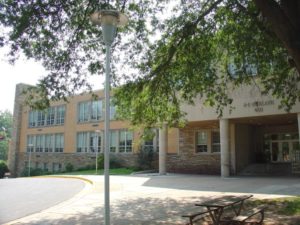 A group of anti-abortion protesters conducted an unannounced demonstration outside of the H-B Woodlawn Secondary Program Thursday afternoon.

The group “had graphic signs, they filmed students, parents and staff members, attempted to distribute flyers and to engage students in discussion,” according to the following letter to parents, sent by the school’s principal.

This afternoon, at dismissal, members of an anti-abortion group appeared in the auditorium parking lot and then on bus loop sidewalk in front of H-B Woodlawn. No advance notice was given to Arlington Public Schools or to H-B Woodlawn and this was not an approved event. HBW administrators and the Arlington police asked the group to move off of school property, but they claimed that they were in the public domain on a public sidewalk.

They had graphic signs, they filmed students, parents and staff members, attempted to distribute flyers and to engage students in discussion. It is unfortunate that they chose that type of confrontational method to express their views to students who are mostly ages 11-18. Please be assured it is not anything we would ever approve of or encourage, and we regret that the events took place. We will continue to have conversations here amongst staff and students about our procedures should they return.