Originally popular in pockets in Germany for hundreds of years, goses began to fall out of favor in the 20th Century until they had a short renaissance after the fall of the Berlin Wall. Much more recently, the beer that was conceived in the town of Goslar and later became synonymous with the city of Leipzig, has been embraced by craft brewers in the United States.

With palates expanding from the amber ales of early craft brewing to the ubiquitous hoppy IPAs to sour beers, brewers have begun looking for styles outside of the Belgian sour brown and lambic for inspiration. I’d written a couple of times about the Berliner Weisse, another German sour variety, but I hadn’t yet waded into the salty waters of the goses.

Goses are sessionable wheat beers, complete with coriander which adds a peppery spice, that are brewed with Lactobacillus (for the souring) and salt. Often fruit is added, just as in other sours, to enhance the flavor, but traditionally they are unflavored in the brewing process.

A 2015 article on thrillist.com claimed that the gose killed craft beer. No way! What it is, however, is another example of the wonderful way that American craft brewers are reviving historic and once regional-only styles so that many more beer drinkers can enjoy them. While goses are growing in popularity, there is no danger that they’ll replace your favorite style for good. Enjoy these funky, spicy and salty brews while they’re around. 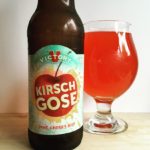 Victory brews this ruby red tart beer as their Spring seasonal and it’s one to look for. The aroma is a subtle blend of alkaline and acerola cherry — giving the distinct impression that sourness will follow. More tart than sour, the flavor starts with bold, real sour cherry followed by a baking soda bite where you’ll get the saltiness. About midway through the sip is a slight sweetness, much like in freshly picked sour cherries. Every year, my family and I love to pick sour cherries — they make great pies — and eating the occasional cherry is part of the pitting process. There’s always the shock of tartness followed by a sneaky sweetness. That’s Kirsch Gose. 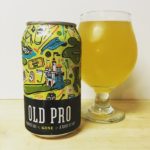 Baltimore’s Union Craft Brewing won the silver medal in German-style Sour Ale at the 2014 Great American Beer Festival. Somehow they manage to not put this all over their site — I had to find a list of winners after seeing an oblique reference to Old Pro (without the brewery name) on Wikipedia. This gose probably hews closer to the traditional style out of Germany as it’s made with just coriander, salt, lactobacillus and German Ale yeast, and wheat and barley. This is an unadorned and unfussy salty sour beer. The aroma is a nose-stinging acetone, which turns pleasantly to lemon. Despite not being a flavored gose, Old Pro is full of citrus flavor: it starts out lemony, but transitions to bitter white grapefruit mid sip. It finishes with clean wheat flour. Don’t be fooled, while the Kirsch Gose is tart, this one is quite sour. Don’t let that deter you, however, because it is so good. At 4.2% alcohol, you can mow the lawn and cool off in the shade with one of these. 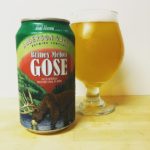 Briney is the key word with this fantastic beer. Another fruit-flavored gose, this one features plenty of fruit and leans more on the salt than on the sour. The aroma is full of melon, I got honey dew rather than watermelon, and Alka Seltzer. The flavor is both simple and kind of complex. It’s salty, though not overly; it’s mildly tart; and the fruit is as clear as if you blended it into agua fresca. I had to share my review sample, but I plan to grab a whole pack of these the next time I find it. I can’t think of a time this summer when this wouldn’t be appropriate. 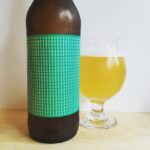 An example of how creative craft brewers can be, Moneytree$ takes a well-hopped session IPA and smashes it together with a salty gose. This is a unique beer. In fact, it was a bit controversial in my household. My wife claims that the aroma is something that I won’t repeat here, but it’s safe to say that it’s a flavor included in the Harry Potter-influenced Jelly Bellies called Beanboozled. I disagree. There’s granny smith apple and grapefruit mingling with a slight funk, but nothing especially off-putting. The sip is quite complex: fruity hops face off with citrus tongue-curdling sour that is bolstered by a definite saltiness. It finishes, however, with a simple lemon/white grapefruit sourness that causes a bit of a pucker. Behind all of that is the pepper from the coriander. This is such a limited release beer that Stillwater doesn’t even include it among their beers on their site. Moneytree$ is fantastic, though, and definitely for the more adventurous. Try it.

Postscript: A beer that made into my samples, but isn’t a gose. 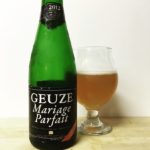 The Belgian style called Geuze is not, in fact, related or the same as the German style called Gose. A geuze is a blend of lambics that are aged to create a complex and wine-like beer. In fact, they are sometimes referred to as the actual champagne of beer. Quickly, true lambics are spontaneously fermented beers or beers that use naturally occurring yeast for fermentation. Needless to say, this is not easy, which is why real lambics tend to be quite special. One clue that this geuze is not the same as the goses above is the alcohol content: 8%. I might as well tell you how it was. The aroma was musty with the tang of underripe fruit and the spiciness of oak. The flavor was a challenging one that hits with cinnamon and lemon, but turns winey and bitter toward the finish. More of a sipper, this was definitely not the refreshing tart brew that you might enjoy on the patio or deck.

All these beers were delicious in their own ways. I actually bought the four-pack of Kirsch Gose that I used for this article and the Moneytree$. In fact, I enjoyed my last Kirsch Gose while writing this column. It’s about to get really hot around here, and I plan to find refreshment in these salty and sour beers. I honestly never thought I’d say that! Have you had any of these beers or maybe there’s another gose that you really like? Share below. Cheers!