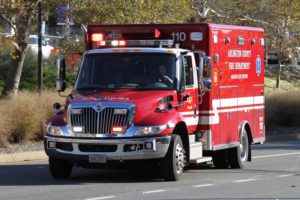 A cyclist was hospitalized in critical condition after a crashing during the Air Force Association Cycling Classic in Crystal City on Sunday.

The crash happened near the beginning of the amateur, non-competitive Challenge Ride Sunday morning.

“There was a collision at the beginning of the course on [Route] 110 underneath 395,” Arlington County Police Department spokeswoman Ashley Savage told ARLnow.com. “A female cyclist was transported to George Washington University Hospital in critical condition. Two additional victims suffered minor injuries and were released from the hospital on Sunday. The cause of the crash is under investigation.”

A witness suggested that the crash might have been caused by a medical issue, though that has not been confirmed.

“She was all alone and nobody within several feet of her,” the witness reported. “Her bike just started to wobble and she went down.”

Another participant in the ride described the incident as “a very serious crash involving multiple riders” on the first lap.

At last check, the woman was said to be in stable condition at the hospital.