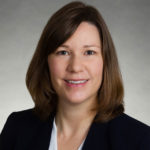 Arlington is searching for a new auditor, the county announced this afternoon.

Jessica Tucker, the county’s first independent auditor to report directly to the County Board, is resigning as of July 8 and taking a new job in California.

Tucker’s tenure at the county started on Jan. 25, and seemed to be going well. She announced that she was seeking audit suggestions from residents last month.

The county released the following press release about Tucker’s resignation and the search for a new auditor.

“We wish Ms. Tucker success in her new endeavor,” said Arlington County Board Chair Libby Garvey. “During her short tenure with the County, she laid the groundwork for a successor to quickly move forward with the Audit Committee’s work plan. At the same time, the work of the County’s internal auditor continues.”

Tucker will end her tenure with the County on July 8. She was named auditor in December, 2015. The County Auditor conducts independent program and operation audits and reviews of County departments, operations and/or County-funded programs, focusing on program efficiency, effectiveness and transparency. The County Auditor augments the County’s internal audit function within the Department of Management and Finance.

In March, The County’s Audit Committee, composed of two Board members, the County Manager, the Acting Director of the County’s Department of Management and Finance and three residents, developed a work plan for the County Auditor, reaching a consensus on the first three assignments: