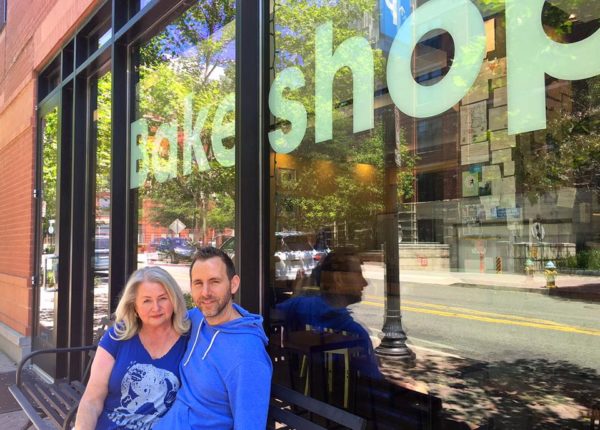 It’s a tad out-of-the-ordinary for a business owner to let his mom tell personal family stories on the business’ Facebook page. But Bakeshop (1025 N. Fillmore Street) in Clarendon isn’t your ordinary business.

On Monday the quirky bakery posted the first in what it says will be a series of “Humans of Bakeshop” posts — a takeoff on the human interest stories compiled by the popular social media publication Humans of New York. The story was from Linda Stegall, mother of shop owner Justin.

“I married my college sweetheart and then put him through 5 years of post grad school while teaching and getting my own masters degree at The University of Virginia. We had two adorable little boys and then we separated when they were 2 and 3 years old. In the absence of their father, I worked hard to be a good mother and father and taught them and their friends how to play football, baseball, how to fish and ride bicycles. I was the neighborhood “dad” and mother. It was the greatest time of my life. I also had the perfect career to be a single parent – I was an elementary school teacher and just retired a few years ago after 35 years of teaching 2nd and 3rd grade! I loved teaching and feel fortunate to have had a career that I was so passionate about.

Family means so much to me.

I still live in northern Va and so do my sons, Justin and Joshua. I’m so proud of both of them- they have grown to be such amazing, kind individuals! My youngest, Josh, married a short while ago to a wonderful girl and we have become part of her extended families. He recently received his MBA from UVA. He is making his way as a leader in the corporate world. He and my amazing daughter in law, Katie, gave me the greatest gift recently, the birth of my first grandchild.

My older son, Justin, followed his dream, which coincidentally began in my kitchen as a child, and is the owner of a lovely neighborhood bakery. It’s doing very well and I am so thankful. I retired to spend more time with my mom and to help him get started in 2010. I love being here, baking and meeting and talking with our customers and working alongside my son.

I’ve worked hard all my life to be able to keep my sons in their childhood home and to take care of the house and yard. My dear father was an engineer and taught me how to do repairs on the furnace, car and tractor. I became very independent and self-sufficient after my divorce.

Hopefully, this paints a small picture of what I’ve been through and what has shaped me.”

As of this morning, the post had received more than 400 likes.

“The reaction was great,” Stegall told ARLnow.com. “We didn’t anticipate the response with my mom’s feature. That blew her away. As her son, I found it so special because she was able to reflect on how many lives she has touched. It was a very emotional experience for her.”

“My mom is an Arlington legend having taught here for 30 years and now helping in the shop where she gets to see many of her former students come in all grown up,” Stegall noted. “People really seem to like the old-school aspect of a neighborhood bakery run by a son and his mom.”

More “Humans of Bakeshop” posts are in the works — perhaps up to one per week.

“A big thing I have worked hard to build is a sense of community for the bakery,” Stegall said said. “For example, we have people that have met at the bakery and gotten married, couples that now have children and spend their Saturday mornings with us. Grandparents that grew up in the area bring their grandchildren here. It’s very special for us. That’s why we started the Humans of Bakeshop series. We want to share the personal stories of people that help operate the bakery and customers that spend their time with us.”