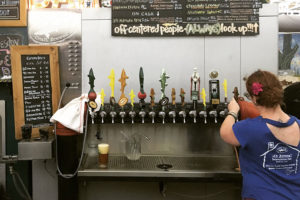 When I was 10, I toured the Coors brewery in Golden, CO with my family. I wandered among the gleaming equipment learning very little about the product that was flowing through it. My souvenir was a water bottle. It might’ve been over my head, but I knew it was a tourist destination — a stop for people who had seen the mountains and the ghost towns in Colorado. This idea of beer tourism has come a long way.

For years, craft breweries that are large enough have offered tours for the curious. But one brewery near our area is going beyond the tour to add more reasons to visit the Delaware shore. Dogfish Head Craft Brewery, which has grown significantly since 1995, is raising the stakes. With brewery tours every day of the week, a boutique motel, and two restaurants at the site of the original brew pub, Dogfish is becoming a tourist attraction on par with the beach and outlets.

If it weren’t for founder Sam Calagione’s then girlfriend, Mariah, we would be talking about Dogfish’s contributions to tourism in another part of the country. As it happened, she talked Sam into setting up his brewery near her family in Delaware. The fact that there wasn’t already a single brewery in Delaware seemed like an even better reason to open one. Well, there was a reason for the lack of competition — Prohibition-era laws prohibited it. Prior to choosing a career in beer, Sam had been on track to become a writer. He worked with lawmakers and even cowrote the legislation needed to make it possible to open his brew pub in Rehoboth. Soon, he was brewing 12 gallons of beer at a time for service in the pub.

That was then. Now Dogfish distributes to 30 states and the District and they are attracting visitors from all over the world. 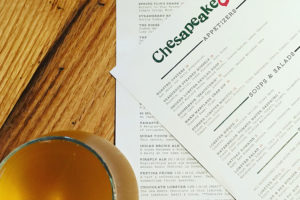 Forming a triangle, Dogfish’s landmarks allow visitors to get a taste of their beer and coastal Delaware at the same time. Starting with the original brew pub in Rehoboth, Dogfish Head Brewings & Eats offers fresh and locally-sourced cuisine. Much of the meat served at the brew pub isn’t just local, it’s partially raised on spent grain from the Milton, DE brewery. As beer is made, malted grain is steeped to get all it’s sugars into the water. What’s left over is grain that has little value for beer, but makes good feed for livestock. Dogfish delivers it’s spent grain to local farmers who then sell their meat back to the brew pub. This packed dining room also offers diners a unique opportunity to explore specially brewed beers that aren’t available anywhere else. Beers like the lobster shell-infused Chocolate Lobster or the super hybrid sour Seaquenchale make the visit worth the wait.

In March of 2016, Chesapeake & Maine opened with a focus on the seafood of Maine and Delmarva. While the brew pub is the older brother, packed with folks looking to experience the original Dogfish location, Chesapeake & Maine is the quirky, cool cousin. Full of artwork by artists like long-time Dogfish collaborator Jon Langford (think 75 Minute, Olde School, Burton Baton), there is a very hip vibe that is more welcoming than exclusive. Though they are wading into the crowded waters of seafood joints in coastal Delaware, their food is best when it’s at its simplest. Their lobster roll is purely delicious and the hush puppies have to be eaten with their ancho chili remoulade (you have to request that specially, but it’s worth it!). 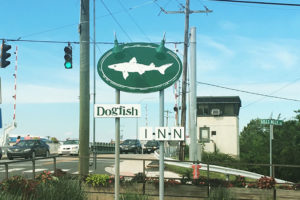 Another recent addition to the Dogfish family is their 16 room boutique motel right in the center of historic Lewes, Delaware — home to founder Sam Calagione and his family. With the motto — it’s painted right on the lobby wall — “Mother Nature, let’s do this”, guests and co-workers (all Dogfish employees are co-workers) are encouraged to interact with nature. A second philosophy also defines the inn — shop local. There is no eatery or bar on site, in fact, no beer is sold in any way at the inn. Guests are directed to restaurants and liquor stores within walking and biking distance in a effort to support local businesses. Rooms are equipped, however, with a 32 oz. growler, a cooler, barware and a tote bag for beach and state park sojourns. Each guest is also afforded the opportunity to use a bike to travel out from the inn to explore.

Another perk for guests at the inn is the ability to get on the All-INNclusive Package. For $45, you start at 9:30 a.m. with a shuttle bus to the brewery that includes a VIP tasting then it’s on to the original brew pub for a guaranteed table. The whole experience ends around 3:30 p.m. so guests can relax before making their own plans for dinner. At night, a fire is lit in the “cowboy cauldron” where guests can relax and share a beer on wooden benches that were made more comfortable by an ingenious suggestion by Sam Calagione, himself: life vest cushions. In colder weather, the party is taken inside the lobby building around the fireplace. Mornings are made all the perkier with specially roasted coffee from local roaster, Notting Hill Coffee Roastery.

Just a few turns off the main drag of sleepy Milton, Delaware is the 200 barrel brewery home of Dogfish Head Craft Brewery. After you pass the iconic shark mark sign, the first thing you see is the large, green building that is home to the offices, tap room and merchandise store. Once here, you can join tours that run every day of the week on a first come, first served basis. Each tour is roughly an hour long, and begins with a small history lesson (fun fact: Ricki Lake was present at the party where Sam decided that he would become a brewer.) and walks you through the brewing process while taking you through the facility. I’ve been on the tour four times and it’s different every time. Finish with a free tasting of four different beers of your own choosing.

For those who feel like they’ve already done that, there’s the Grain to Glass tour. For $30 a person, guests get a true behind the scenes look at the brewery — and the distillery. Check out the cold storage where the ingredients live; see the grain room; get inside the normally locked barrel aging room; visit the distillery and enjoy a cocktail while learning about the process; sample some of “Sam’s Stash,” a collection of past Dogfish brews; and, climb up into the steam punk tree house, which is normally closed to the public. It’s a VIP experience for the everyday craft beer lover.

With everything that Dogfish offers the craft beer tourist, you might have to plan another visit to coastal Delaware to see everything else. Whether you’re a regular at your local nano brewery or someone who frequents the neighborhood bottle shop, making craft beer a destination is a great travel option. Dogfish Head Craft Brewery is on point with their three-pronged offering.

I tried a few of the special small-batch brews that I alluded to above. Here are my thoughts.

This very limited draft-only beer has been a fan favorite since it’s release in 2012. Live lobsters and cocoa are added to a porter during the boil at the beginning of the brewing process. The result is a stout ale that combines the bitterness of roasted malt with chocolate and celery seed-like herb flavor. There’s something about knowing that lobsters were boiled to make this beer that makes you search for the crustacean in the flavor. What’s there is a vague brackish flavor, marked by the herbal notes without any of the salt. This is a unique beer that is shines with the desirable flavor of chocolate while it hints at the wild ocean from the lobsters.

Part of a series that started with a DIPA, the second entry sees Raison d’Etre fermented with Belgian yeast then transferred to wine barrels with syrah grape must (the grape mash that is used to make wine) and brettanomyces. What comes out of the tap is a complex beer that balances sweetness with a clean grape flavor before turning tart in the finish. Much of the sweetness is left over from the already strong Raison, meaning that there is some booziness in the flavor. Altogether, though, the result is a satisfying brew. I tried to get a growler of this one, as it’s also on tap currently at the brewery, but no dice. It’s that special.

A super combo of three seemingly incompatible German styles — Kölsch, Gose and Berliner Weisse —  Sequenchale ends tasting like the beer cocktail it is. Affectionately described by Sam Calagione as a margarita beer, this light brew brims with limey citrus tang while hinting at the saltiness on the rim of a margarita glass. Peeking around the edges is a softness from the Kölsch that keeps this two parts sour beer from overpowering the palate. After a hot afternoon of wandering the boardwalk and shops in downtown Rehoboth, this refreshing beer really hit the spot. While this beer is currently only offered at Chesapeake & Maine, I was told that it will likely make it next door soon.

As I put the final touches on this week’s column, I realized that June 23rd is the anniversary of the opening the Dogfish Head Brewings & Eats. Happy 21st anniversary Dogfish Head Craft Brewery! Cheers!