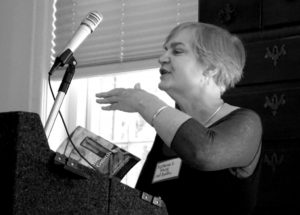 Katherine E. Young, who has lived in Arlington for three decades, is an award-winning poet and literary translator. She will serve at our local Poet Laureate for two years, receiving an annual honorarium of $1,500.

In a press release sent at 3 p.m. Friday, the county said a ceremony will be held for Young at a County Board meeting next month.

“The new Poet Laureate will work with Cultural Affairs and Library staff to develop and facilitate public programs to engage Arlingtonians of all ages and backgrounds and bring poetry to a wider audience,” notes the press release (after the jump).

Katherine E. Young has been selected the first Poet Laureate of Arlington County. She will be installed at a brief ceremony during the County Board recessed meeting at 3 p.m., Tuesday, July 19, at 2100 Clarendon Blvd.

During her two-year appointment, the 30-year County resident will serve as an advocate for poetry and the literary arts and will work to raise Arlingtonians’ consciousness and appreciation of poetry in its written and spoken forms.

Young has won numerous awards as a poet and also as a literary translator. She has read her poetry at the Library of Congress and in venues throughout the United States and abroad. These include the Oxford (U.K.) Literary Festival, and at English and Scottish venues from Cheltenham to Edinburgh.

Her reviews and criticism have appeared in Poet Lore and the Innisfree Poetry Journal. She also has taught K – 12 students through the Pick-a-Poet program, a partnership between Arlington Cultural Affairs and the Arlington Public Schools (APS) Humanities Project, which places professional poets in APS classrooms. She holds a Master of Fine Arts degree in creative writing.

Arlington County’s Poet Laureate program is managed as a partnership between the Cultural Affairs division of Arlington Economic Development and Arlington Public Library.

“Poetry is a dynamic form, taking the language of its time and pushing its expressive limits. And social media is changing the way we use language,” Cultural Affairs Director Michelle Isabelle-Stark said. “It’s now easier than ever to write and share poems. Our new Poet Laureate will work with our community to awaken the poet in all of us.”

The new Poet Laureate will work with Cultural Affairs and Library staff to develop and facilitate public programs to engage Arlingtonians of all ages and backgrounds and bring poetry to a wider audience.

“A poet is the conscience of a community,” Library Director Diane Kresh said. “With words and rhythms, the tools of their trade, poets are our seers and celebrants, our advocates and our healers.  We are excited to welcome Katherine E. Young and look forward to adding her unique voice to our community conversations.”

The Poet Laureate will receive an honorarium of $1,500 per year, provided through regular Cultural Affairs programming funds and the generosity of the Friends of the Arlington Public Library. The Laureate’s name will be inscribed on a new commemorative plaque to be installed at the County offices in Courthouse Plaza.

Arlington has long embraced poetry as a civic art form. The Moving Words competition, now in its 16th year, places winning poems by local poets on Arlington Transit ART buses so riders can travel well beyond their intended destinations. Beginning this year, the Poet Laureate will serve as the competition’s judge.

For National Poetry Month, AED’s Cultural Affairs division, Arlington Public Library and the Columbia Pike Revitalization Organization teamed up to conceive “The Poet is IN” pop-up booths. The program puts noted regional poets in public places like farmers markets and libraries, to create free, customized poems for customers right on the spot.

Poet laureates are a well-established tradition in the United States and abroad. Regional neighbors with poet laureates include the District of Columbia, Prince William County and Takoma Park, Md. Virginia has had a state laureate since 1936.

Since 1937, the United States has had an official poet through the Library of Congress.

Arlington’s first poet laureate competition garnered 17 eligible submissions, with candidates needing to be at least 18 years of age and residents of the County. Entries were reviewed by Cultural Affairs and Library staff and Grace Cavalieri, award-winning poet, playwright and host of “The Poet and the Poem” radio program and podcast presented by the Library of Congress.

Katherine E. Young is the author of Day of the Border Guards (University of Arkansas Miller Williams Prize Series, 2014), which was named one of Split This Rock’s “eagerly anticipated” picks for 2014, one of Beltway Poetry’s “Best Books of  2014″ and an Honorable Mention for the North Carolina Poetry Society’s Brockman-Campbell Award.

Young’s poems, translations and reviews have appeared in Prairie Schooner, Shenandoah, The Iowa Review and many other publications. Her translation of Russian poet Xenia Emelyanova won third place in the 2014 Joseph Brodsky-Stephen Spender Prize competition.

Her translations of Inna Kabysh won third place in the 2011 Joseph Brodsky-Stephen Spender Prize competition and were commended by the judges of the 2012 Brodsky-Spender Prize. A dual-language iPad edition of Kabysh’s poetry that includes both text and audio, Two Poems, was published by Artist’s Proof Editions in 2014; a full-length collection of Kabysh’s work, Cat and Mouse, was named a finalist for the Cliff Becker Book Prize in Translation. Young’s translations of Vladimir Kornilov appear in the Penguin Book of Russian Poetry. In 2015 she was named a Hawthornden Fellow.