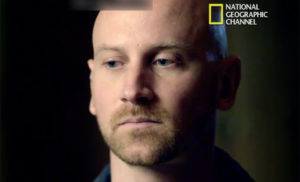 This coming Tuesday, the National Geographic channel will air an episode of its “No Man Left Behind” series featuring the heroic story of a Courthouse resident and former Army special forces soldier.

The story, as reported in this Washington Post article, takes place in Afghanistan’s infamous Shok Valley, as a group of Green Berets are lured into a trap and ambushed by enemy fighters.

“In 2008, while on a daring raid in Afghanistan, US Green Beret Sergeant First Class, Dillon Behr suffered two gunshot wounds, one to his right bicep and one to his right pelvis/hip, as well as severe abdominal injuries,” said show notes sent by a Nat Geo PR rep. “In No Man Left Behind, he shares the unbelievable story of survival, recalling how his team managed to hold off the enemy for seven hours, despite several of them being injured, until they finally evacuated the wounded and returned to safety.”

Behr and his fellow Green Berets recount their experience during the hour-long show.

“I felt this strange calm and I remember thinking this is it, this is the moment I’m going to die,” he said.

Per the show notes: “Behr was treated for his injuries at Walter Reed Medical Center, and has been living in the D.C. metro area ever since. He received a Master’s Degree from Georgetown University and currently works for a cyber security firm. Up until a few months ago, he also ran a non-profit cross-fit gym for injured soldiers at Walter Reed.”

The episode will air Tuesday, July 12 at 9 p.m. on the National Geographic Channel.