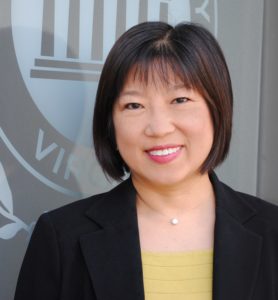 Diana Sun is set to retire from her post as Arlington County’s chief spokeswoman this summer after 13 years on the job.

Sun, who joined the county as director of communications and assistant county manager in 2003, is slated to step down in the next couple of weeks. Her last day will be Friday, Sept. 2.

County Manager Mark Schwartz, who announced Sun’s retirement at a County Board meeting last month, said her communications department had “excellent relationships” with journalists and was available at all times to help with media relations.

“She’s held our communications efforts to the highest ethical standards and she has enhanced our reputation as a national leader,” he said.

Prior to working for the county, Sun served as the vice president of corporate communications at Capital One. The experience she brought with her had an immediate effect on the county government, her co-workers said.

“She joined us when we had at best a rudimentary public information office structure and she was bought in to professionalize and modernize the effort and she succeeded brilliantly at the task,” said Schwartz. “She built what I think is one of the best communications teams of any jurisdiction in the commonwealth and perhaps the United States. We are regarded as leaders and innovators in so many areas.”

During her time in the county government, Sun helped oversee the building and rebuilding of the county’s website, led the county’s expansion into social media, redesigned its Citizen newspaper and tracked down the history of the county seal, eventually getting it trademarked.

“The length of time you’ve been here, there’s been an enormous evolution of the communications function here in the county and a professionalization of that,” County Board member Jay Fisette said.