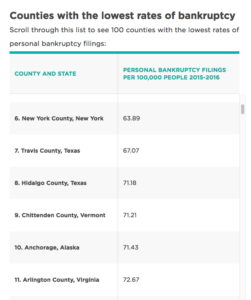 Arlington County has the eleventh lowest personal bankruptcy rate among U.S. counties, according to newly-compiled statistics.

The website NerdWallet says that Arlington had only 72.67 personal bankruptcy filings for every 100,000 people between 2015 and 2016. That’s about 160 total bankruptcies in Arlington over a one year period.

“Even with bankruptcy filings declining across the nation, Americans living in some parts of the country have a much higher bankruptcy rate than in other places,” Nerdwallet wrote. The south and parts of the midwest, in particular, had the some of the highest rates of bankruptcy filings, while the northeast U.S. stood out as a region for having rates mostly below the median.