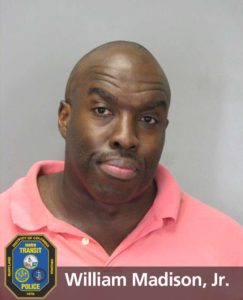 A 47-year-old Alexandria man has been arrested and charged with exposing himself to multiple women on Metro trains.

The first incident happened in Arlington County on March 28, aboard a Blue Line train to Franconia. The suspect, William Madison, Jr., was subsequently arrested and charged with indecent exposure on July 29. Then, on August 15, Metro Transit Police say Madison again exposed himself to a woman, this time on an Orange Line train in Fairfax County.

Police believe Madison might have committed similar crimes that went unreported, and are asking any additional victims to come forward.

From a Metro press release:

For the second time in less than three weeks, Metro Transit Police (MTPD) have arrested a Virginia man on charges of indecent exposure. The suspect, William Madison, Jr., 47, of Alexandria, is now facing charges in Arlington and Fairfax counties.

Madison was first arrested by Transit Police on July 29 after being located by the MTPD warrant squad. The original offense occurred in Arlington County March 28, 2016, aboard a Franconia-bound Blue Line train. Madison is accused of exposing himself to an adult female passenger aboard the train. Following his arrest, Madison was released on his personal recognizance.

At approximately 8:30 p.m. Monday, August 15, Madison allegedly exposed himself to an adult female passenger aboard a Vienna-bound Orange Line train. MTPD detectives were able to identify Madison using CCTV cameras and subsequently obtained an arrest warrant. Madison was re-arrested yesterday at Huntington Station while attempting to enter the Metrorail system. He was transported to the Fairfax County Adult Detention Center, where he was held on a $1,000 secured bond.

Based on these circumstances, Transit Police detectives believe there may be additional victims. Anyone with information for investigators is urged to call the MTPD Criminal Investigations Division at (301) 955-3000.