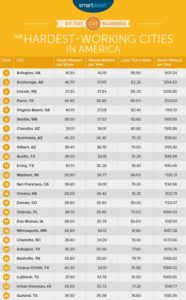 Arlington County is the hardest-working “city” in the United States, at least according to a new set of rankings.

People in Arlington work an average of 41.5 hours per week and 40.15 weeks per year, according to SmartAsset. The company said that Arlington benefitted from steady employment at the Pentagon and other federal government offices.

In Arlington people work an average of 41.5 hours per week. This figure is the highest in the country and a big reason Arlington comes in as the hardest-working city in America.

The largest private companies (in terms of employees) in the city are Deloitte and Accenture. Other large private companies owe their presence to the nearby Department of Defense, like Lockheed Martin. All in all, workers in Arlington work an average of 1,431 hours per year.