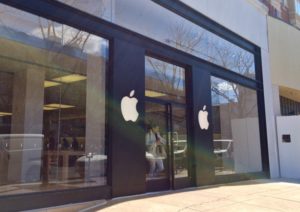 Local Apple fans may soon have to head to D.C. or Tysons if they want to get their iPhone, iPad or Macbook direct from the source.

The Apple Store in the Pentagon City mall has announced that it will be closing for renovations starting on Sunday, Sept. 25.

“We’re making the Apple Store you love even lovelier,” the announcement says.

Meanwhile, the Clarendon Apple Store remains closed due to renovations and no reopening date has been announced. The renovations may have been hampered by a large electrical fire at the Market Common Clarendon shopping center.

The new iPhone 7 launches this coming Friday, Sept. 16, leaving only 9 days to get one before the Pentagon City store shuts its doors. Other Apple Store locations in the D.C. area include Georgetown, Tysons Corner and Bethesda.

Update at 9:30 a.m. — A number of readers have said that they’ve received emails or had conversations with employees at other Apple stores indicating that the Clarendon store will reopen on or around Sept. 24. The store’s website and phone number still does not list an opening date, and no opening date was posted on the store’s exterior on Monday.