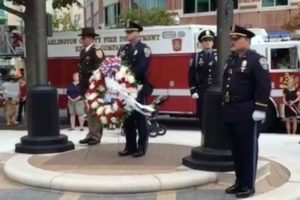 A man has been charged with vandalizing the wreath placed during Arlington’s 9/11 memorial ceremony.

The incident happened in Courthouse just after 11 a.m. on Sunday, shortly after the ceremony.

Police say 51-year-old Charles Harris removed flowers from the wreath and left the petals on the sidewalk. He was charged with the crimes of Injuring a Memorial and Drunk in Public.

INJURING A MEMORIAL, 160911022, 1500 block of N. Courthouse Road. At approximately 11:16 a.m. on September 11, police were dispatched to the report of a subject destroying the 9/11 Memorial Wreath used during the County’s September 11 Observance. Upon arrival, officers observed the subject removing flowers from the wreath and discarding petals on the sidewalk. Charles Harris, 51, of No Fixed Address was arrested and charged with Injuring a Memorial and Drunk In Public. He was held on a $1,000 secured bond.