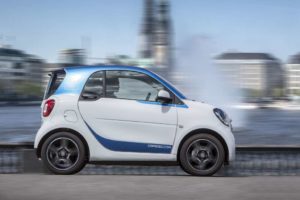 As Metro prepares for 45 days of major service disruptions on the Orange Line due to SafeTrack Surge No. 9, the carsharing service Car2Go says business is booming in Arlington.

SafeTrack, combined with the recently-added ability to travel between Arlington and D.C., has resulted in a “a 540 percent increase in the average number of trips beginning or ending in Arlington, a 22 percent jump in overall Car2Go trips in the region, and a 63 percent increase in average weekly memberships,” according to Car2Go.

“Car2Go membership in Arlington and D.C. has passed the 57,000 member mark, making it one of the largest in North America,” the company added.

That’s a reversal from earlier this year, when Car2Go said it was struggling to gain traction in Arlington.

Car2Go is rolling out upgraded versions of its cars in the area through the end of the year. The new cars are still the same Smart Fortwo model, but with faster unlocking, Bluetooth access for wireless calls and music, seat warmers, roomier interiors, a bigger trunk, improved safety features and a faster motor.