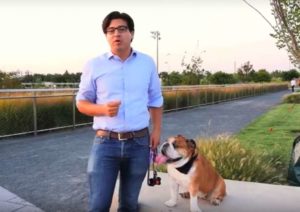 At a time when Donald Trump is at the top of the Republican Party’s ticket, GOP congressional hopeful Charles Hernick is, well, not anything like Donald Trump.

He’s a policy wonk who isn’t one for heated rhetoric. He’s an economic conservative who’s largely a libertarian on social issues. He believes more needs to be done about climate change.

Hernick truly believes he can do a better job in office than Rep. Don Beyer (D), but — unlike the current presidential race dynamic — doesn’t think Beyer should be jailed. In fact, Hernick acknowledges that Beyer is basically free of skeletons in his closet, which makes running against him even more of an uphill battle than he would otherwise face in the deep blue Eighth District of Virginia.

We talked with Hernick about the issues, about Trump and about Hernick’s own one-time intra-party foe, the ever-interesting Mike Webb.

Be sure to subscribe to ARLnow.com’s podcast, 26 Square Miles, on iTunes, Google Play,Stitcher or TuneIn.