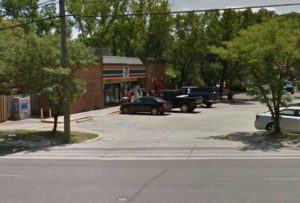 A man was tasered by police at the 7-Eleven store at 4970 Columbia Pike on Monday afternoon.

Around 1 p.m., an Arlington County police officer working a traffic detail was flagged down by a 7-Eleven employee, who said that two men in the store were concealing items with the intent of stealing them.

“When confronted by an employee, the subjects threw items at the store employees as they attempted to flee,” said ACPD spokeswoman Ashley Savage. “One subject fled the area on foot. The officer attempted to detain the other subject in order to conduct the investigation but the subject refused to follow the officer’s lawful commands and resisted arrest.”

“The officer deployed his taser and the subject was taken into custody,” Savage continued. “The subject was evaluated by medics and transported to booking.”

The suspect’s name was not immediately available.