In the mid-nineties two breweries opened across the United States from each other. One in a former mechanic shop in Utah and the other in a brew pub in Delaware. They each had a philosophy that drove them. They each developed an aesthetic that defined them. In 2016, they both underwent a facelift, a redesign of their core beer labels. 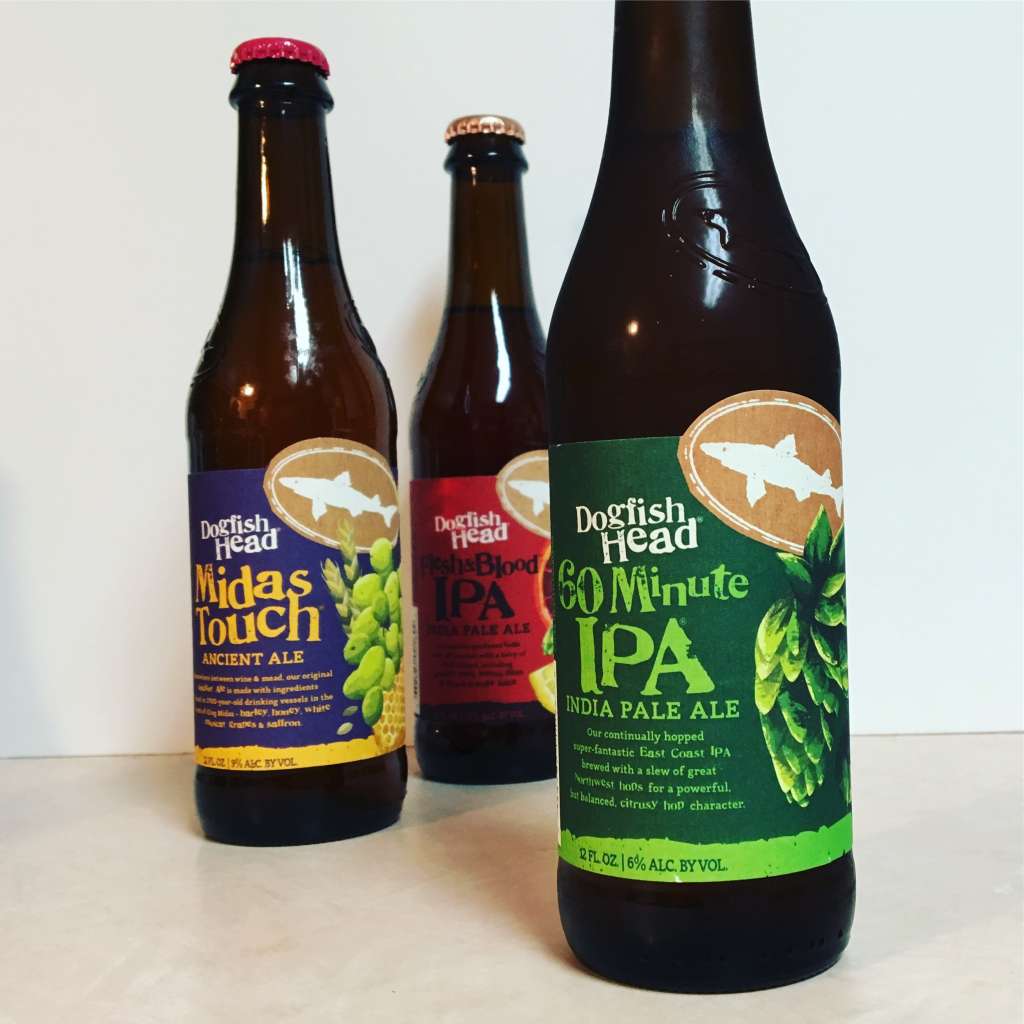 Dogfish Head Craft Brewery started in 1995 as a brew pub in Rehoboth, Delaware. From the beginning, Sam Calagione saw his beers as intrinsically connected to food. Whether it was his use of the wine-bottle sized bottles to encourage sharing over a meal or the exploration of beers that used culinary ingredients, the brewery was establishing a consistent approach. In the 21 years since opening, Dogfish Head built a recognizable brand with the shark logo and Sam-inspired “Doggy” typeface.

The importance of the ingredients and the basic elements of Dogfish Head’s design have come together to create the new look of their core releases — their IPAs and other year-round releases. Prior to this year, Dogfish labeled its core beers with a plain label that used “Doggy” and the shark, while its ancient ales had unique labels that featured imagery that evoked the origin of the beer. Now all of the core releases, which includes some ancient ales, sport colorful labels that feature painterly illustrations of key ingredients along with brewery ID and beer name/description in playfully set “Doggy.” Off-centered, like it’s beers, is the shark logo as it breaks out of the label. Dogfish Head’s in-house department worked with Boulder, CO-based food and beverage packaging design studio, Interact, to develop the new look. 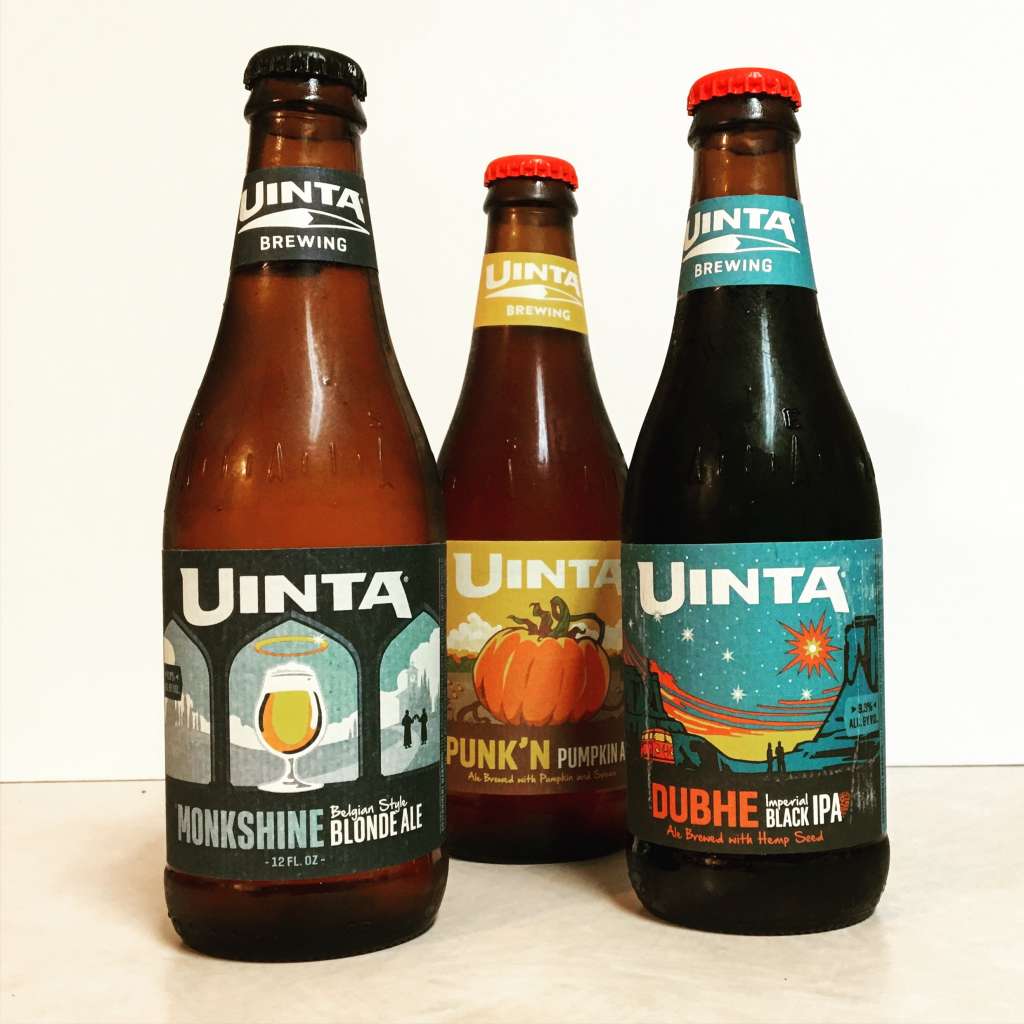 Out west, in 1993 Uinta Brewing Company set up shop in the state with the fewest beer drinkers. Their first beers included three that remain in their core beers to this day: Cutthroat Pale Ale, King’s Peak Porter and Trader IPA. In 2005, Uinta created the specialty brewery called Four +, which was responsible for beers like Monkshine and Wyld. In 2011, they introduced the compass to their brand. This year, the compass at the center of their brand and their various 12 oz. releases finally came together to form a consistent Uinta-infused look.

Working with studios like Portland-based Sincerely, Truman and Nashville-based Anderson Design Group, Uinta introduced both a new logo and refined look that ties all their core releases together. Starting with a new logo that streamlines the well-known compass and mountain range mark to feature a simple east-west pointing diamond with a clean, bold typeface. The labels tie together beers like Punk’N and Monkshine — whose labels were simple and type only — with their illustration-based releases like Dubhe and Cutthroat. Prior to this redesign, the illustration-based labels used WPA-style images that evoked National Parks posters. Now all of their labels feature the colorful nature images, uniting all their beers and making them stand out on the shelf.

In this age of Instagram and Untappd, breweries’ core releases are increasingly considered passé by beer drinkers looking for the next big thing. A good redesign generates fresh buzz. A good redesign gets at the essence of a brand — the personality and the visual style. A good redesign re-introduces a brewery to beer drinkers. We all win with these two redesigns, since we get attractive packaging and delicious beer. Go ahead and judge these beers by their labels, you won’t be disappointed. 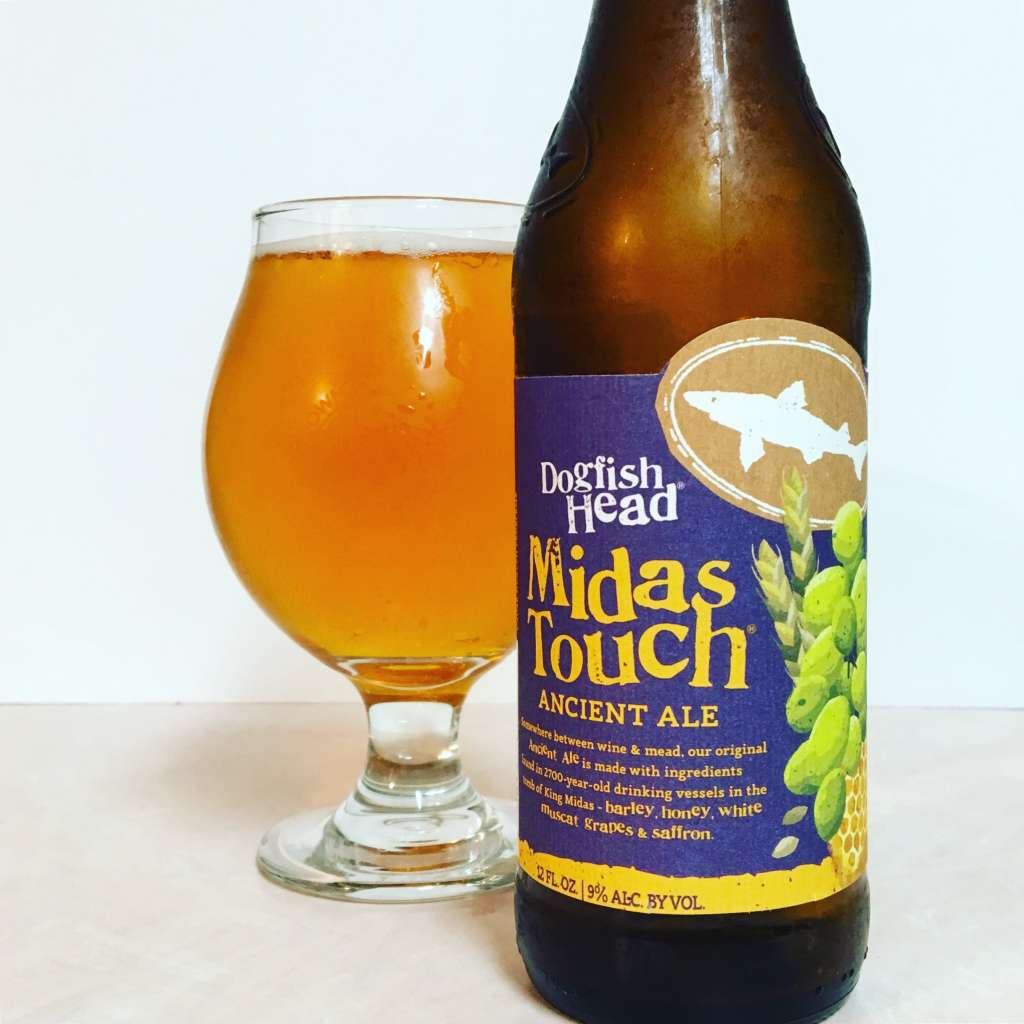 Part of the Ancient Ales category, Midas Touch always had a unique label. An oversized golden fingerprint sat a top a solid purple label with the words “Midas Touch” in an evocative typeface that suggested Mesopotamia. Now, the purple carries forward with the gold transferring to the beer name. Rather than referring the golden touch that King Midas was said to have, Dogfish focuses on the ingredients. That, after all, is what makes this beer so unique. The illustration under the Dogfish shark logo depicts generous amounts of muscat grapes, barley and honey comb.

Midas Touch has been in the Dogfish Head line up since it first arrived in 1999. This early example of the wine hybrid beer adds mead to the mix — based on analysis of residue in vessels taken from the tomb of King Midas in Gordion, Turkey. Make no mistake about this beer — it’s not in the same vein as their much loved IPAs — this is a sweet, delicate brew with grapes, honey and malt at the fore. Let Midas Touch warm slightly out of the refrigerator and you’ll get a nose full of ice wine. If you have a taste for dessert wines, you’ll enjoy the sweet fruitiness up front. A malty finish keeps you from forgetting that this is still a beer. Despite its sweetness, I always feel that the honey takes a backseat to the grapes. Enjoy this winey beer with some cheese or a creamy alfredo. 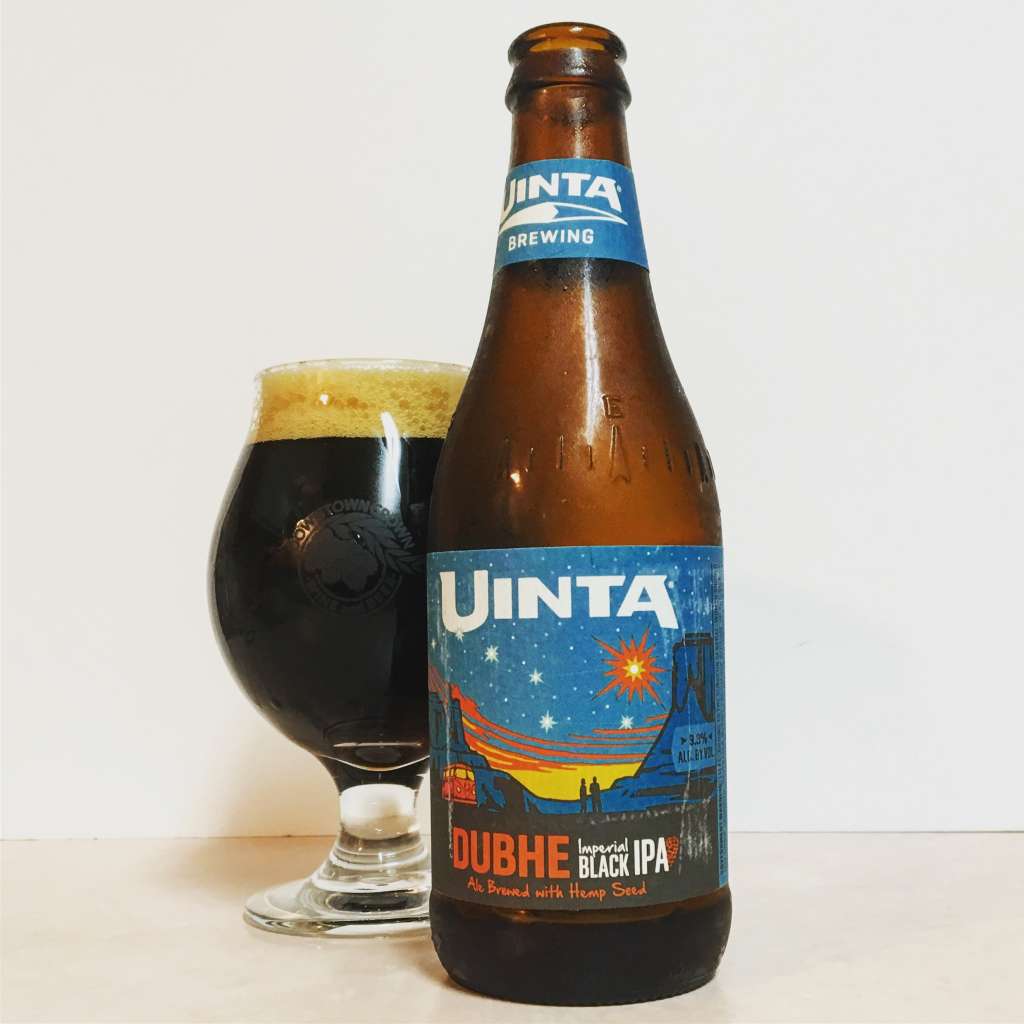 Uinta’s year-round black IPA made a modest change from its previous look. Dubhe’s previous label featured a nighttime scene in a Monument Valley-like setting featuring the name swooping underneath the mountains. Now, the setting is the same, but at twilight as the smallest amount of orange light remains on the horizon. In the foreground is a red VW bus, which sits directly above the name, which is now set in a condensed sans serif typeface that appears hand drawn like the illustration above. Shining brightly in the dark sky is the official star of Utah, Dubhe, which makes up part of the big dipper.

Dubhe pours stout black with a rich, creamy head. Between the appearance and the aroma, which balances black coffee and cocoa with the cardamom sharpness of pine sap, you’d be excused for confusing it with a spiced Turkish coffee. This beer is appropriately sweet, thanks to the alcohol, but the dark roasted malt combines with the dank hops to create a richly flavored beer that evokes the spiced coffee that is hinted at in the aroma. Black IPAs are one of my favorite emerging categories and this beer is regularly a go-to for me.