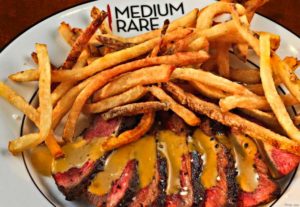 The steakhouse hinted that it’s bringing something to Arlington “in [the] next few months.” Asked by ARLnow.com for additional information, the restaurant replied, “not yet.”

Noted for its simplicity, moderate prices, selection of sauces and crowd-pleasing desserts, Medium Rare currently has two locations in the District: on Barracks Row and in Cleveland Park.

Arlington VA, Guess what….#secretsauce might be closer then you think in next few months !!

Hey Arlington VA, are you ready for some #secretsauce?….