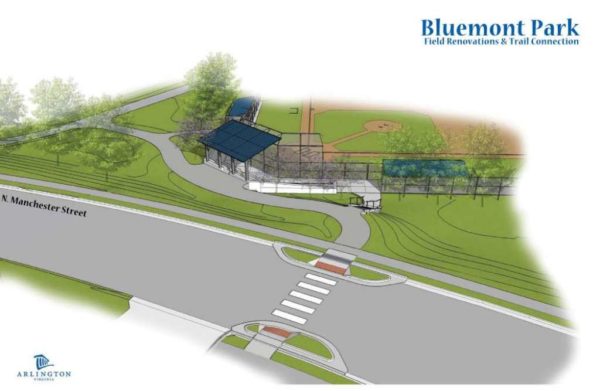 The following Letter to the Editor was written by Sandra Spear, who lives near Bluemont Park and objects to the installation of a fence as part of the planned renovation of a baseball field in the park. Spear is responding to a Letter to the Editor in support of the fence, written on behalf of Arlington’s baseball community and published by ARLnow.com last week.

I am one of the many users of Bluemont Park who object to the County fencing off a quarter of its expansive open field for exclusive use by baseball players. This letter responds to John Foti’s October 20 letter to the editor at ARLnow in support of the fence, which both misunderstands the community’s opposition to the fence and makes our case for us.

Right now, Bluemont Park contains the largest contiguous open space in the entire County, a space that is unique and irreplaceable at any cost. The proposed Bluemont fence would eliminate an acre of that open space by fencing it off for the exclusive use of baseball players 24/7 year round, irrespective of the fact that baseball is a seasonal, late afternoon and weekend sport played at most 20% of daylight hours in a year. The issue then is not that baseball players don’t use the field more; it’s that other people of all ages use it now during the 80% of the time baseball does not use it. It is that use that the fence would eliminate or seriously impede. Continuing to accommodate that use would require replacing the open space.

The proposed fence would close off roughly 40,000 square feet. Replacement land near Bluemont Park costs over $100 per square foot, so true cost accounting would place the cost of that fence at over four million dollars. Is the baseball community willing to raise more than $40,000 per player (using Mr. Foti’s estimate of 1,000 players) to achieve baseball field perfection? Because asking taxpayers to fund baseball field perfection for a scant half a percent of the population is a tough sell.

This is a policy question for the County. If baseball fields are to be fenced off County wide, it could become an incredibly expensive sport, because much of that open space would have to be replaced. Those 1,000 players may be playing on up to ten fields during the year, so the baseball community is actually asking taxpayers to replace $40 million worth of land – at a cost of $400,000 per player.

It turns out that fences aren’t actually necessary for baseball played by 8- to 12-year-olds.

First, the baseball community argues that the fence is necessary to mitigate costs of repairing damage to the field caused by non-baseball users. If users are damaging the field now it is because the field has poor drainage and, paradoxically, no irrigation, conditions shared by most athletic fields in the County. Both conditions are to be addressed with the proposed upgrade to the Bluemont field, obviating most maintenance issues. But even if other users do harm the field, maintenance is incredibly cheap compared to the cost of replacing lost open space.

Second, the baseball community argues that a fence delineates the field for other park users to warn them to stay out during practices and games. But having held out for baseball perfection in the form of permanent or even seasonal fencing, they have not explored less expensive and intrusive means of marking the field. Signs and paint can do wonders once one has ruled out metal and concrete.

Third, the baseball community claims that safety demands a fence, yet they can cite not a single incident where a passer-by was injured by a budding Bryce Harper. Since Virginia is a contributory-negligence state, adequate warning signs can again come to the rescue.

Finally, fence proponents have argued that baseball fields should be treated like tennis courts. Their argument is misplaced: Tennis is played from dawn to past dusk and by players from 5 to 95 years of age. The problem with a fenced-off baseball field is not the time when baseball is actually being played; it’s that baseball can actually be played so little of the time, but a fence closes it off all of the time.

Mr. Foti closes his letter by reference to the several thousand kids who play baseball in Arlington. Unless the families of those kids plan to raise the millions it would cost to replace the fenced off open space, perhaps the baseball community should consider the interests of the 220,000 other Arlingtonians who use and pay for the parks before demanding perfection for the one percent and exclusion of the other 99 percent.