There’s a well-known phrase claiming that from necessity comes invention. But sometimes it’s more the case of “from annoyance comes invention.” That’s exactly what prompted a local entrepreneur to invent an app to ease lost wanderers’ frustration at the grocery store. 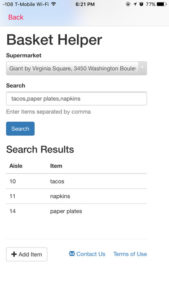 Minh Tran, of Safety Now Solutions, has created an app called Basket Helper that points users to desired items at a Giant grocery store. It’s not for all Giant stores; very specifically, it’s for the Virginia Square Giant at 3450 Washington Blvd. Right now it’s a pilot that Tran hopes will expand to include other locations.

He took this on as a personal side project, unrelated to Safety Now Solutions’ typical work.

“We usually do public safety software, but this project I made kind of for myself because I was so frustrated with the shopping process,” he says. “Basically when I go to the supermarket I often don’t know where things are. It’s frustrating to walk up and down the store [aisles] staring at the sign that’s above you just to find the right aisle.”

Although some grocery stores have similar apps that show customers which items are in which aisles, Giant does not. Enter Tran and his test pilot. 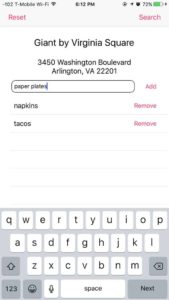 The app functions simply: Users type in the items they want to purchase, hit “search” and the store aisle number appears. The platform is programmed to accept many partial word matches or alternate spellings, so entering “lightbulb” and “light bulb” should both provide the correct aisle. Some brand names also come up with a match.

A unique way Tran envisions the app helping people is when they send someone else on an errand to the store. Users can go onto the website app and “actually send your partner the link” showing all the items’ locations, says Tran. “You can type in the things you need and then copy and paste the search link to your partner and they would know which aisle to go to,” he says. That means no more “I couldn’t find it” excuses from the person who went on the errand.

The pilot launched earlier this month on iOS, Android and a website app. Currently it is independent of the Giant grocery chain, but Tran hopes to change that. He has pitched the app idea to Giant and is waiting to hear if they’ll buy it and expand it to other stores. He’s also considered contacting Safeway, because that chain’s app only allows users to search for one item at a time.

Devising the app itself only took a day or two; what’s been time consuming is entering all the items into the database. But Tran only expects to deal with that for the pilot. Once stores purchase the app, they’ll then enter the information themselves. “You can do it quickly if you have multiple people doing it in multiple aisles,” Tran says. Perhaps, for example, employees could add the items to the database as they restock the shelves.

Keep in mind that this prototype can’t guarantee that every single item in the Virginia Square Giant is listed. But so far it comes pretty darn close; with about 3,000 searchable items, Tran estimates about 75 percent of the store’s items are in the database.

“I thought a tool like this would be helpful,” he says. “I wanted to see if people would embrace the idea.”