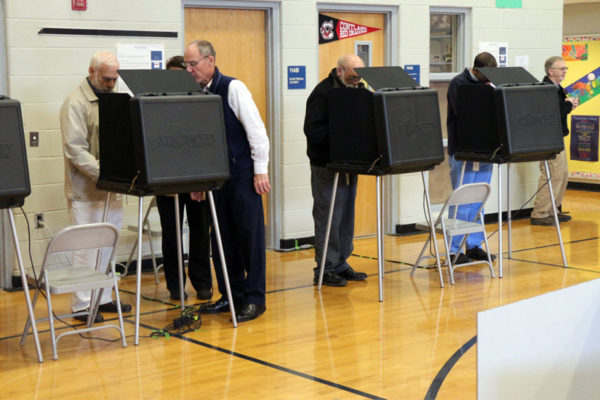 Who should you call should you suspect election fraud or voting rights abuse at the polls on Election Day next week?

The regional U.S. Attorney’s Office says to give them a call.

In a press release, prosecutors say that such complaints on Election Day (Tuesday, Nov. 8) will be handled by Assistant U.S. Attorney James P. Gillis, who can be reached at 703-299-3700.

For more mundane problems at the polls that don’t rise to the level of a federal offense, voters can notify one of the poll workers or call the Arlington County elections office at 703-228-3456. Officials say Arlington is well-prepared for the anticipated crush of voters during a particularly contentious presidential election year.

Our election officers and staff are well-trained and prepared for the big day! https://t.co/0BViHHEV6c

The full U.S. Attorney’s Office press release, after the jump.

Assistant U.S. Attorneys James P. Gillis, Randy Stoker, and L. Margaret Harker have been appointed to serve as District Election Officers (DEO) for the Eastern District of Virginia, and will lead the efforts of his Office in connection with the Justice Department’s nationwide Election Day Program for the upcoming general elections.

District Election Officers are responsible for overseeing the district’s handling of complaints of election fraud and voting rights abuses in consultation with Justice Department Headquarters in Washington, D.C.

“Every citizen must be able to vote without interference or discrimination,” said U.S. Attorney Dana J. Boente. “They need to have that vote counted without it being stolen because of fraud.  The Department of Justice will act promptly and aggressively to protect the integrity of the election process.”

The Department of Justice has an important role in deterring election fraud and discrimination at the polls, and combating these violations whenever and wherever they occur. The Department’s long-standing Election Day Program furthers these goals, and also seeks to ensure public confidence in the integrity of the election process by providing local points of contact within the Department for the public to report possible election fraud and voting rights violations while the polls are open on election day.

Federal law protects against such crimes as intimidating or bribing voters, buying and selling votes, impersonating voters, altering vote tallies, stuffing ballot boxes, and marking ballots for voters against their wishes or without their input. It also contains special protections for the rights of voters and provides that they can vote free from acts that intimidate or harass them. For example, actions of persons designed to interrupt or intimidate voters at polling places by questioning or challenging them, or by photographing or videotaping them, under the pretext that these are actions to uncover illegal voting may violate federal voting rights law. Further, federal law protects the right of voters to mark their own ballot or to be assisted by a person of their choice.

In order to respond to complaints of election fraud or voting rights abuses on November 8, the DEOs will be on duty while the polls are open.

In addition, the FBI will have special agents available in each field office and resident agency throughout the country to receive allegations of election fraud and other election abuses on election day.