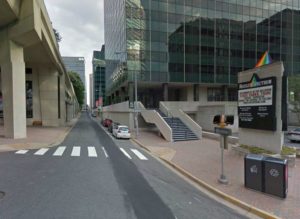 Arlington County Police are investigating a death in Rosslyn.

A body was found this morning on the 1600 block of N. Kent Street, a narrow one-way that runs by the Rosslyn Spectrum theater.

At this point the death is not considered suspicious and is being investigated as a probable suicide, said Arlington County Police spokeswoman Ashley Savage.

Police are expected to remain on scene for some time, interviewing witnesses and conducting a death investigation.