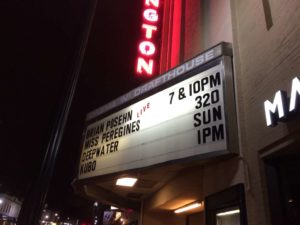 The Arlington Cinema and Drafthouse (2903 Columbia Pike) will shift to an art-house movie model and away from showing mainstream films several months after their initial release.

The change will be formally announced in an email to customers this afternoon, Drafthouse owner Greg Godbout said.

The announcement comes three weeks after the Drafthouse began surveying customers on proposed changes to the theater’s business model, floating the idea of showing first-run movies during the summer, at a time when live comedy audiences — the Drafthouse’s bread and butter — are down.

Otherwise, when comedy acts and special events are not booked, the Drafthouse has been showing “sub-run” movies, which are movies that have been playing at the multiplexes for several months and which are, typically, close to being released to home viewers via Video on Demand.

Earlier VOD release dates have been cutting into the audience for sub-run movies, Godbout said, so he was thinking of showing blockbuster movies for a week at a time over the summer — a model many other single-screen theaters adopt (studio rules prohibit showing multiple first-run films on the same screen).

The feedback from customers, however, pointed him to indie and art-house style films rather than the typical big-budget mainstream popcorn flick.

The theater will continue to offer family-friendly movies and entertainment, particularly during matinee times, but the $2 discount movies on Monday and Tuesday nights will either go away completely or the price will be raised, said Godbout.

Another change in the works: the replacement of the Drafthouse’s aging seats with new office chairs.

At the Drafthouse’s new D.C. location, meanwhile, more changes: local and national standup comedy acts will continue to perform, but there will be a new focus on hosting Esports competitions — live videogame tournaments, which are gaining in popularity.

The full letter from Godbout, after the jump.

I am following up based on the overwhelmingly positive response to our survey about a new directions for Movies at the Arlington Drafthouse. Your enthusiasm and responses were incredibly helpful and have significantly influenced the direction of our community business. Thank you so much for being the best customer base ever. In this letter I will first explain the new direction and then detail some of the findings from the Survey.

Art-House Model
As my last letter detailed, the sub-run top box office model has been in decline and a change is necessary. A common theme in your responses was a desire for the Drafthouse to remain eclectic and unique. A first run summer season with top box office movies, would have not been unique enough. Our new theme of booking will be art-house/independent films. We will continue with the plan to do first release movies during the summer and sub-run movies in the Fall, Winter, and Spring – under the new art-house genre.

Flexible Booking
The studios that book art-house /independent films are more flexible in their terms, requiring only a week play. This allows us to do a couple weeks of a different first release movie each week and blend in a comedy weekend here and there during the summer.

Timeline
Changes to movie programming in Arlington will begin in January 2017 leading up to an official switch to art-house programming in May of 2017. In January we will start booking more independent films to begin the transition. In May we will begin the first release art-house films for the Summer. In May our contracts with studios will change, which will allow us access to more films earlier – but less control of the pricing. Discount $2 Mondays and Tuesday will end starting in May of 2017. The new discount price will be around $7.

Seating
We have begun the process to bring in new seats. Over 120 have been replaced. More to come throughout the winter.

The Results of the Survey
The survey was very helpful to inform this decision. We so appreciate your time and dedication to this…

Thank you again for your time and dedication to this process.By switching to a more exclusive and unique programming of art-house films, we can keep the Arlington Cinema & Drafthouse relevant in the DC area movie scene. Many details have to be worked out, and we thank you for your support while we transition to the new model.

In order to better understand the art-house/independent movie industry, we will be joining an association of similar single-screen art-house theaters and looking to bring on a curator to select the films. We are so excited for the opportunity to serve you.