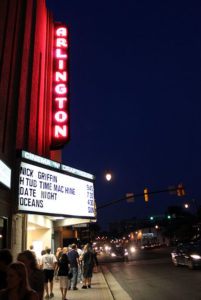 An iconic local business may be making some major changes next year.

The Arlington Cinema and Drafthouse, at 2903 Columbia Pike, sent an email to customers on Sunday night, seeking feedback on a proposal that would change the way it books entertainment options.

Historically, sub-run movies are movies that have been out a few months but are not yet on home video or on-demand. But that has been changing — now such movies make it to on-demand and home video faster, which has led to a slump in the sub-run movie model, says Drafthouse owner Greg Godbout.

Godbout, who runs the venue with his wife Colleen, said the business of showing sub-run movies for discounted prices has been in decline for years, with fewer people finding a reason to pay to go out to a movie that they can just watch at home.

“The studios have no interest in keeping the sub-run model alive,” he said. “This has been something that has been trending for some time and we now have to do something about it.”

The proposal, as presented to customers, would bring first-run movies to the Drafthouse, but only for part of the year. In the summer, when comedy attendance is down, the Drafthouse would exclusively show new Hollywood releases. The rest of the year, the same mix of comedy, events and sub-run movies would return.

Studio rules dictate that the Drafthouse can’t show new releases and other entertainment on the same screen or stage. So if the change were to be made the Drafthouse would, during the summer, follow roughly the same model as the Uptown Theater in D.C., showing one first-run movie exclusively for a couple of weeks before moving on to another.

“As we make this decision, it’s a significant change — trying to figure out how we change our model to fit the movie industry, so we can continue to do movies,” said Godbout. “We’ve had so many internal discussions about this, but we’ve never opened it up and said, ‘hey customers, what do you think about this?'”

He said the response to his email has been overwhelming: less than 24 hours after he sent it Sunday night, more than 1,600 people had already filled out a survey that he linked to in the email.

“We’re so fortunate, we have a very passionate fan base,” Godbout said. “This is the best type of market research you can imagine. People have also been emailing privately, I can barely keep up with it.”

Godbout said a final decision needs to be made by February, to give the Drafthouse enough time to book movies in advance for the summer. The decision, he hinted, may be different than what was proposed in the email, in response to feedback.

“That proposal, while still in tact, is changing significantly based on responses,” he said. “People are saying, remain unique, don’t be like everything else.”

But change is likely either way.

“When you run a small business, nothing is permanent, you have to adapt,” said Godbout.

The change took on a bit more urgency this year because so-called “disposable income venues” — entertainment venues, restaurants, etc. — in the area are experiencing a downturn that Godbout attributed to election anxiety.

Despite that, the Drafthouse is investing in its future with planned maintenance to its neon “ARLINGTON” sign and the replacement of its more worn-out chairs.

Godbout said certain things about the Drafthouse, which he and Colleen first took over in 2005, are not changing. The new chairs, for instance, will still be office chairs. And the shows will go on.

“We’re not shutting our doors,” he said. “This will still be the comfortable place to come to enjoy world class entertainment.”

The full email, after the jump.

This year has been a tough year for the Arlington Cinema & Drafthouse. Decreasing movie business used to be offset by a rapidly growing live comedy business. This year, the comedy business growth slowed, starting in the early summer. Our research has pointed to increased uncertainty and fear around the election as a primary cause of the Summer/Fall slump. Many retail and entertainment businesses throughout the DC area experienced the same slump – and nationally we have found the same trend. While we cannot control these ups and down in the overall market – it has forced us to take a hard look at the balance of entertainment offerings and business operations of trying to maintain both the movie business and comedy business at the same time.

While the Summer/Fall slump has been harsh, the overall decline in the movie business for the Arlington Cinema & Drafthouse has been a 10+ year trend. It has greatly sped up in recent years due to increased competition in the area and home entertainment. The decline is mostly due to the dying Sub-Run movie model, the same model that the Arlington Cinema & Drafthouse operates under.

In the Sub-Run movie model, the theater owner can choose their own pricing, can show multiple films in the same theater, and allow for other entertainment (like comedy) to perform. Sub-Run movies are first release films that have been out in the theaters for 2 to 5 months. We get access to them once the First-Run theaters are finished with them (lost their value). We used to get films well before DVD or On-Demand release. That is no longer true. More than half of the films we bring in are either already available at home or about to be. The Sub-Run movie window no longer exists.

If we switched to a First-Run movie model (first week released films), we would not be allowed to do any other entertainment on our screen/stage except for that specific film. We would also have to raise our prices and guarantee 2 to 3 week runs for the films. No comedy, no sports, no TV, no special events, etc. Even if the film is doing terribly – we would have to keep it for the full guaranteed length of play. The advantage to First-Run is you get a film at it’s height of popularity and advertising.

How to Keep Movies

Movies have been part of the Arlington Cinema & Drafthouse’s long history. Going back to even before the theater was a Drafthouse. In an effort to create a new entertainment model that includes movies, we have come up with a new possible strategy and want your feedback. We have to decide this month if we are going to proceed with this new model.

Under the proposed new entertainment model, starting May 1st 2017, we would split the year into two seasons:

NOTE: The new DC location will continue to do live comedy year round. So comedy fans will still have access to top national comedy acts in the summer.

Upside: The live comedy business softens in the summer, at the same time the First-Run movie business has it’s strongest time of the year. The hope is to balance both and present them at their peak season.

Downside: In order to do this, we would have to drop our discount movies on Monday and Tuesday. We would have fixed pricing on movies ($9.50 prime-time, $7.50 matinee) *estimate. We would also have to reduce our menu to fewer food items, in order to streamline food service and offer food service during slower movie nights in the summer. Also if we get a bad movie in the summer – the business will be slow for weeks.

Please take a moment and let us know what you think via the survey link below. Only 3 questions! Please give us feedback.
https://www.surveymonkey.com/r/2HST6WT

We could really use your business and we would love to make you laugh and entertain you. We are working hard this month to fix the Arlington sign and buy new seats. We expect this to be finished by early December. Please come visit us for movies and/or comedy.

END_OF_DOCUMENT_TOKEN_TO_BE_REPLACED

More Stories
A Day in the Life: Bringing Local News to the CommunityPodcast: Live Election Night Broadcast and Interviews