When and if more manufacturing jobs start returning to the U.S., MicroBenefits will be on hand to provide “front-line workers” with a useful tool that helps them work safer and more efficiently, provides training and a pathway for advancement, and creates powerful communication capabilities between the workers and management. 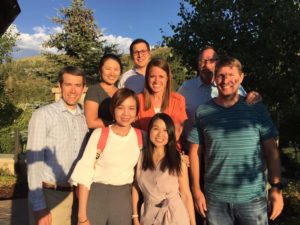 The Arlington-based startup, with U.S. operations headquartered in Crystal City’s 1776 business incubator, is already in operation in factories in China. Vietnam is coming online soon; factories in the Philippines are slated for early 2017.

“We’re making English and Spanish versions of the app and we’ll enter different markets [in those languages] as we have opportunities with different brands,” said Mason Chenn, director of business development.

“A front-line worker is the person who is assembling your smartphone or your speakers, or is sewing the shirts you are buying from a brand that you know,” he said. “They’re the person putting the stitches together or screwing the screws into the device.” 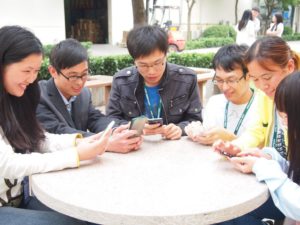 If you’ve ever been a front-line worker you know that it’s an isolating position, even though you may be surrounded by coworkers and supervisors. You punch the clock when you come in, do your job and punch out. In some management structures, the only time you get to communicate common problems is over a beverage with coworkers after hours. And visiting with human resources or upper management is a big, tension-filled deal.

Smart companies know they operate more efficiently when they receive feedback from their employees. What MicroBenefits does is give those front-line workers access to a number of channels they never had before via smartphones.

“We offer a mobile technology platform that helps empower front line workers,” Chenn said, bravely attempting to summarize. “The elevator speech gets very complicated after that.”

“We’re trying to solve compliance issues around environmental health and safety. We help to qualify workers for advancement within their organizations with training opportunities. And we provide feedback channels so workers have a voice in the factor to talk about the issues they’re experiencing.” 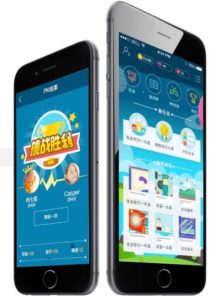 For a real-life example, MicroBenefits works with an electronics brand’s factory in China with some 5,000 workers. Management provides the MicroBenefits app to the workers. The app can serve as a communication platform, a training delivery system or perform payroll/HR functions.

The app can serve as “peer-to-peer messaging or it can be used to promote content to make workers aware of [advancement] opportunities,” said Chenn. “It can deliver environmental health and safety training, so this is compliance training every worker needs to receive.”

This is particularly useful when a factory has unusual pressures put on it, such as when a brand introduces a hot new device or sneaker and workforce demand is stressed.

It’s also useful for overcoming “bad procedures and behavior,” Chenn said. “Labor issues, working hours and cultural nuances come into play. Front-line workers find themselves in situations where they may have a boss who is not following protocol but factory management wouldn’t know about it because it’s several layers down.” MicroBenefits closes those gaps.

MicroBenefits was founded as a pivot of an existing company, MicroCredit, in 2013, to accommodate a vast market of migrant, blue-collar Chinese workers. In 2013 there were a dozen employees, Chenn said. There are now 70, mostly in China but also in Arlington and Utah.

“We’re in about 30 factories of the brands we work with,” Chenn said. “With the ebb and flow of the manufacturing world we have at anytime between 300,000 to a half of a million users.”

Chenn was the first U.S. hire and “we’re building from scratch. It’s like a startup within a startup” for the U.S.-based unit.

And as for working at 1776, where MicroBenefits has been ensconced since last spring, Chenn said the assistance offered is invaluable. “You can pick their brain on something, they can help you find somebody to have chat with. It’s an awesome resource.”

END_OF_DOCUMENT_TOKEN_TO_BE_REPLACED

More Stories
Malcolm Gladwell to Speak at GMU in ArlingtonLegal Insider: Is the Right to Disconnect in France a Trend?