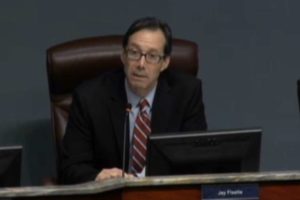 (Updated at 9:30 a.m.) Two members of the local Democratic party will lead the Arlington County Board this year, breaking a longtime tradition.

Jay Fisette was unanimously elected County Board Chair during the Board’s annual organizational meeting last night. This is Fisette’s fifth time serving as chair since he was first elected to the Board nearly 20 years ago.

It is a long-standing tradition that Board chairmanship rotate among members by seniority, with the vice chair assuming the chairmanship the next year. Often it corresponds with election cycles, with the member who is up for reelection the following year being elected vice chair. But the Board broke with tradition by electing one of its newest members, Democrat Katie Cristol, over independent John Vihstadt.

The snub was, however, in keeping with another long-standing practice: as the Sun Gazette’s Scott McCaffrey pointed out, the party in power on the Board has “always installed its own people in the leadership… going as far back as I can tell.”

In his remarks, Vihstadt suggested that “partisan politics alone” led to the contested race for vice chair.

“People with the word Democrat, Republican, Green, Libertarian or Socialist stamped on their foreheads, are sorted and stereotyped forever as a result,” Vihstadt said. “I’ve been there myself. It’s why I ran as an independent and have governed that way every day.” 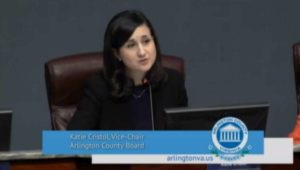 Cristol responded: “In Arlington, being a Democrat is not just partisan, it’s shorthand for values and what we prioritize: meaningful investments and affordable housing, for deep commitments to schools.”

Fisette, who acknowledged the contested vote was an “unusual situation,” backed Cristol, while Libby Garvey, the outgoing Chair, backed Vihstadt.

Ultimately, the board followed the new Chair’s lead, with Garvey and Vihstadt on one side of the vote, and Fisette, Cristol and Christian Dorsey on the other.

After the polite political quarrel, Fisette outlined his priorities for the year. As chair, Fisette said he will focus on:

Additionally, Vice Chair Cristol said she hopes to “work to ensure that Arlington will still be a home for all economic classes,” adding that she looks forward “launching a series of coffees focused on ‘big picture’ issues targeting young Arlingtonians in particular, as well as exploring other models to tap the brainpower of Arlingtonians across different walks of life.”

Arlington County can “no longer can we rely on the federal government to guide and support us with allegiance to shared purposes and our common humanity,” added Fisette, alluding to the recent affirmation of the Republican majority in Congress and the election of Donald Trump.

“This year is likely to bring dramatic, unsettling changes in our national government and on the international scene,” Fisette said. “Arlington will feel some effects. But we’ll respond as we have before in times of turbulence and periods of more gradual change: with sensible actions inspired by a shared community vision and shaped through thoughtful dialogue and open debate.”